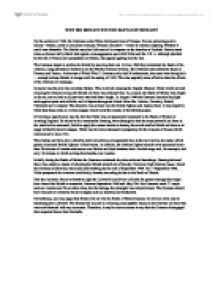 WHY DID BRITAIN WIN THE BATTLE OF BRITAIN? By the summer of 1940, the Germans under Hitler dominated most of Europe. His one remaining active enemy-Britain, under a new prime minister, Winston Churchill-vowed to continue fighting. Whether it could was debatable. The British army had left most of its weapons on the beaches at Dunkirk. Britain stood alone as Russia led by Stalin had signed a non-aggression pact with Hitler and the U.S. A. although shocked by the fall of France and sympathetic to Britain, was against getting into the war. The Germans hoped to subdue the British by starving them out. ...read more.

The objective was to draw out the British fighters and destroy them. It was hoped by Hitler that these raids on civilian targets would lower the morale of the British people. Of immense significance was the fact that Hitler was not personally interested in the Battle of Britain or invading England. He relied on his commander Goering, who although he had the most powerful air force in the world at his command, failed to apply the correct tactics to destroy the much smaller British air force or to target militarily decisive targets. Hitler was far more interested in preparing for the invasion of Russia which commenced in June 1941. ...read more.

Had they not been forced to bomb at night the Luftwaffe could have inflicted far greater damage that might have forced the British to surrender. Between September 1940 and May 1941 the Germans made 71 major raids on London and 56 on other cities, but the damage they brought was indiscriminate. The Germans should have focused on militarily decisive targets such as factories and dockyards. Nevertheless, one may argue that Britain did not win the Battle of Britain because we did not come near to destroying the Luftwaffe. The British did succeed in inflicting unacceptable losses on the German air force that were not balanced with any successes. Therefore, it may be more accurate to say that the Germans disengaged their superior forces from the battle. ...read more.