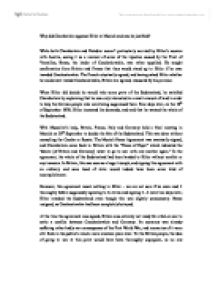 Why did Chamberlain appease Hitler at Munich and was he justified?

Why did Chamberlain appease Hitler at Munich and was he justified? While both Chamberlain and Deladier weren't particularly worried by Hitler's reunion with Austria, seeing it as a reversal of some of the injustice caused by the Treat of Versailles, Benes, the leader of Czechoslovakia, was rather appalled. He sought confirmation from Britain and France that they would stand up to Hitler if he ever invaded Czechoslovakia. The French reluctantly agreed, and having asked Hitler whether he would ever invade Czechoslovakia, Britain too agreed, reassured by his promise. When Hitler did decide he would take some parts of the Sudetenland, he satisfied Chamberlain by explaining that he was only interested in a small amount of land in order to help the German people who were being suppressed there. Four days later, on the 19th of September 1938, Hitler increased his demands, and said that he wanted the whole of the Sudetenland. ...read more.

At the time the agreement was signed, Britain was certainly not ready for a full-on war to settle a conflict between Czechoslovakia and Germany. Its economy was already suffering rather badly as a consequence of the First World War, and memories of it were still fresh in the public's mind a mere nineteen years later. To the British people, the idea of going to war at this point would have been thoroughly unpopular, as no one particularly wanted to relive the horrors of the Great War. Chamberlain's advisors supported this idea, telling him that Britain would never win a war against Germany. Importantly, the USA too were completely against going to war. Although historians now believe that British intelligence reports about the state of the German armed forces were wholly exaggerated, the thought of going to war against a country equipped to such a superior extent must have been rather difficult for Chamberlain. ...read more.

Churchill, who criticised appeasement but then went on to become Prime Minister when Chamberlain was proved wrong, was a relatively unimportant politician at the time. It was infinitely harder for Chamberlain to make the right decision then than it for historians to analyse the facts now, with the benefit of a great deal more knowledge. Hence, I feel it is necessary to say that one cannot definitely say that Chamberlain was wrong to appease Hitler, nor can one blame him for the course of action he chose to take. Although it is easy to say now that Chamberlain was in no way justified to appease Hitler, Chamberlain and his advisors had come to the conclusion that war in 1938 had to be avoided at all costs. Chamberlain had no way of knowing that Hitler would invade the Sudetenland on the 1st of October that year. I believe that one cannot condone Chamberlain's actions, but even though history has proved him to have been unsuccessful, one cannot say that he was in no way justified by attempting to appease Hitler. ...read more.