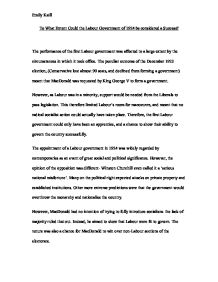 To What Extent Could the Labour Government of 1924 be considered a Success? The performance of the first Labour government was affected to a large extent by the circumstances in which it took office. The peculiar outcome of the December 1923 election, (Conservative lost almost 90 seats, and declined from forming a government) meant that MacDonald was requested by King George V to form a government. However, as Labour was in a minority, support would be needed from the Liberals to pass legislation. This therefore limited Labour's room for manoeuvre, and meant that no radical socialist action could actually have taken place. Therefore, the first Labour government could only have been an apprentice, and a chance to show their ability to govern the country successfully. The appointment of a Labour government in 1924 was widely regarded by contemporaries as an event of great social and political significance. However, the opinion of the opposition was different- Winston Churchill even called it a 'serious national misfortune'. ...read more.

These led to their defeat and ultimately, their failure, in the October 1924 election. The Zinoviev Letter is thought to be largely instrumental in the Labour defeat in the October 1924 election. The Zinoviev letter was allegedly sent from Grigori Zinoviev, president of the Executive Committee of the Communist International, encouraging subversion. The letter was published in the right-wing newspaper The Daily Mail and gave the impression to the general public that the Labour party had links with Soviet Communists. This left the Labour party extremely defenceless, as without any way of proving the letter was a forgery, and an election in four days, the party was doomed to failure. The Zinoviev Letter was infact later proven a forgery. The 1999 Daily Telegraph enquiry showed that the letter was a possible attempt by anti-Communist intelligence agencies to allow the Conservatives to win the election. Another issue which led the first Labour government to its failure was the Campbell Case. J.R. Campbell, as acting editor for the Communist Workers Weekly, published an appeal to the armed forces not to fire on strikers. ...read more.

Many left wing radicals were disappointed and criticised MacDonald's period in office, for their refusal to enforce stronger socialist measures. However this could never have been fully achieved as being a minority government, Labour were only in office, not strictly in power. MacDonald's aim was never in fact to fully introduce socialism; his objectives were more moderate, and these objectives were generally achieved. Although Labour were defeated in the October 1924 election, the Liberals were seen as the real losers- their number of seats plummeted from 158 to just 40, which led to the demise of the party and therefore the return of two-party politics. Another factor which must be addressed when considering the extent of the success of the first Labour government is what the general public would have expected from the party, and whether this was achieved or not. These expectations are largely based around the introduction of the welfare state, better international relations and greater economic control and intervention. These issues were certainly addressed to an extent, and considering the circumstances and the time in office being only 10 months, were tackled very well. Emily Kaill ...read more.