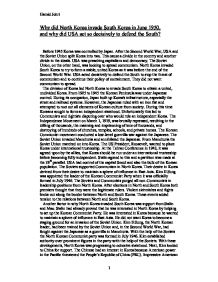 Why did North Korea invade South Korea in June 1950, and why did USA act so decisively to defend the South?

Why did North Korea invade South Korea in June 1950, and why did USA act so decisively to defend the South? Before 1945 Korea was controlled by Japan. After the Second World War, USA and the Soviet Union split Korea into two. This cause a divide in the country and another divide in the ideals. USA was preaching capitalism and democracy. The Soviet Union, on the other hand, was looking to spread communism. North Korea invaded South Korea to try to form a stable, united Korea as it was before the end of the Second World War. USA acted decisively to defend the South to stop the threat of communism and to continue their policy of containment. They did not want communism to spread. The division of Korea led North Korea to invade South Korea to obtain a united, undivided Korea. From 1905 to 1945 the Korean Peninsula was under Japanese control. During its occupation, Japan built up Korea's infrastructure, especially the street and railroad systems. However, the Japanese ruled with an iron fist and attempted to root out all elements of Korean culture from society. During this time Koreans sought to form an independent statehood. Unfortunately this led to Communists and rightists disputing over who would rule an independent Korea. The Independence Movement on March 1, 1919, was brutally repressed, resulting in the killing of thousands, the maiming and imprisoning of tens of thousands, and destroying of hundreds of churches, temples, schools, and private homes. ...read more.

The invasion started on 25th June 1950. North Korea propaganda claimed that it was a reaction to a South Korean attack. Truman was in Washington and he was outraged. Therefore the intervention and support of Stalin and Mao was critical, and a main factor in why North Korea invaded South Korea. However, as well as looking at why North Korea invaded South Korea, there was also the question of why USA acted so decisively to defend the South. The ideological conflict and the past events that had occurred made the USA act decisively to defend the South. The ideology of USA was that every country should have a democratic government and they promoted capitalism. 1n 1914, at the beginning of the First World War, the USA adopted a policy of isolationism. They concentrated on economic, industrial and domestic issues. But this policy did not work!! Truman, the American president, had a lesson to learn if he wanted to be an influential figure in world politics. Isolationism was wrong. It did not work in the First World War and it was not going to work in the future. In the future intervention was needed. They were given the title of "World Policemen" because they felt that they could be influential in the future. In the First World War, the allies needed America's help to win the war. ...read more.

It urged a termination of hostilities and the withdrawal of North Korean forces to the 38th Parallel. A second resolution urged member states of the UN Security Council to assist South Korea and repel the attack and restore peace. Although Truman and Acheson supported the ideal of collective security, they really used the UN Security Council mainly as a vehicle for achieving their own interests. Securing international peace was a secondary goal. The role of the United Nations and the Security Council in supporting action in Korea made USA take decisive action in defending the South. This is because they had international support and therefore the invasion seemed legitimate. North Korea invaded South Korea because of the desire for Kim Il Sung to unite both North and South into one. Even without the two superpowers being involved I think that an invasion by the North would have occurred eventually. The two superpowers wanted Korea as a sphere of influence. Both USSR and USA had their buffer zones, but a longing to gain more land and resources than each other, led to antagonism between the two. I think that even if South Korea had invaded North Korea, the feeling would have been mutual that Russia would have also acted decisively. Therefore USA acted decisively to defend the South because of the tension between the two superpowers, and also because of the fear of the spread of communism. Hamid Johri 1 ...read more.