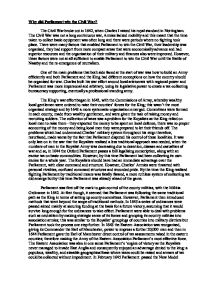 Why did parliament win the civil war?

Why did Parliament win the Civil War? The Civil War broke out in 1642, when Charles I raised his royal standard in Nottingham. The Civil War was not a long continuous war, Armies lacked mobility and this meant that the time taken to collect basic equipment was often long and there were periods where no fighting took place. There were many factors that enabled Parliament to win the Civil War, their leadership was organised, they had support from more compact areas that were economically advance and had superior resources and the organisation of their military and finances also were improved. However, these factors were not at all sufficient to enable Parliament to win the Civil War until the Battle of Naseby and the re-emergence of neutralism. One of the main problems that both side faced at the start of war was how to build an Army efficiently and both Parliament and the King had different conceptions on how the country should be organised for war. Charles built his war effort around local aristocrats with regional power and Parliament was more impersonal and arbitrary, using its legislative power to create a tax-collecting bureaucracy supporting, eventually a professional standing army. ...read more.

Parliament was first off the mark to gain control of the county militias, with the Militia Ordinance in 1642. At first though, it seemed that Parliament was following the same traditional path as the King in terms of setting up county committees. However, Parliament then introduced methods that went beyond the scope of traditional methods. In 1643 a series of ordinances were passed aimed mainly at securing funding at the basis for a future victory, assuming that it would survive long enough for the ordinances to take effect. Parliament were able to deal with problems such as neutralism by making strategic sense of its forces and grouping its country militias into association armies; this was similar to the Royalist' groupings of counties into military districts but Parliament took the process one step further. In 1643 the Eastern Association was reorganised, giving its Commander the Earl of Manchester, power to impress a further 20,000 men and then in 1644 Parliament gave the Earl of Manchester direct control of tax assessments raised in the eastern counties; therefore making the Army of the Eastern Association Parliament's most effective force. ...read more.

The Battle at Marston Moor was Parliaments first major victory and helped Parliament win the Civil War as it enabled Parliament to redeploy its armies in the Midlands and South, boosted Parliaments morale and enhanced the reputation of Oliver Cromwell. Throughout the beginning of the Civil War there were political divisions and internal arguments within the Parliamentary party as no single person could claim the right to make decisions as the King could and 'war' and 'peace' parties formed, which believed in different things. This political crisis was resolved by the Self-Denying Ordinance in April 1645, which separated military and political factions and paved way for the New Model Army which was controlled by centralised command. In conclusion Parliament were able to win the Civil War due to superior resources, better leadership and military command and superior support. However the victory was not inevitable as the King did have some advantages over Parliament. However, it was the Parliaments ability to utilise their superior resources and the Kings inability to utilise theirs that enabled Parliament to win the Civil War. ...read more.