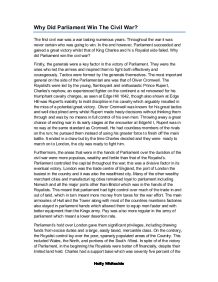 Why Did Parliament Win The Civil War?

Why Did Parliament Win The Civil War? The first civil war was a war lasting numerous years. Throughout the war it was never certain who was going to win. In the end however, Parliament succeeded and gained a great victory whilst that of King Charles and his Royalist side failed. Why did Parliament win the civil war? Firstly, the generals were a key factor in the victory of Parliament. They were the ones who led the armies and inspired them to fight both effectively and courageously. Tactics were formed by the generals themselves. The most important general on the side of the Parliamentarians was that of Oliver Cromwell. The Royalist's were led by the young, flamboyant and enthusiastic Prince Rupert, Charles's nephew, an experienced fighter on the continent and renowned for his triumphant cavalry charges, as seen at Edge Hill 1642, though also shown at Edge Hill was Rupert's inability to instil discipline in his cavalry which arguably resulted in the miss of a potential great victory. ...read more.

Pay was also more regular in the army of parliament which meant a lower desertion rate. Parliament's hold over London gave them significant privileges, including drawing funds from excise duties and a large, easily taxed, mercantile class. On the contrary, the Royalist control lay over the poor, sparsely populated areas of the Country. This included Wales, the North, and portions of the South-West. In spite of of the victory of Parliament, in the beginning the Royalists were better off financially, despite their limited land held. Charles had a support base which was seventy five percent of the English Aristocracy, who funded the initial stages of the war effort by selling their own possessions and raising personal regiments of Troop and Horse; also Parliaments main means of finance was taxation which took time to assess and collect. The Solemn League and Covenant with the Scots Presbyterian's, signed in 1644, who in turn promised their aid against Charles l on the condition that the Scottish system of church government was adopted in England meant that the King then had two enemies to fight. ...read more.

Angela Anderson says how "the King was unable to capitalise upon his early advantages" he didn't take the opportunity when he had the chance to. Anderson then goes on to say that "Secondly the position of parliament was not as disastrous as it appeared, and included certain long-term advantages if survival could be secured for long enough to capitalise on them." Parliament wasn't in a weak position at all despite what it may have seemed. The side of parliament were able to hold on for long enough to make a move in on the opposing side. Parliament was simply more suited to war, more organised, and able to represent and plan all the things that are vital for military campaigns. The King was the big planner on the Royalist side, of course, but you could argue that he was less of a co-ordinated military thinker, and when compared with Cromwell, the born-again zealot, less driven. Team spirit of cause, good leadership and more than a little luck played its part in making the side of Parliament victorious. ?? ?? ?? ?? Holly Whiteside ...read more.