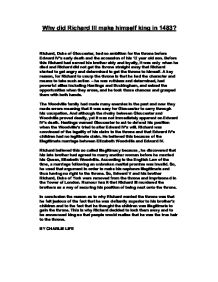 Why did Richard III make himself king in 1483?

Why did Richard III make himself king in 1483? Richard, Duke of Gloucester, had no ambition for the throne before Edward IV's early death and the accession of his 12 year old son. Before this Richard had served his brother ably and loyally, it was only when he died and Richard did not get the throne straight away that Richard started to get angry and determined to get the throne to himself. A key reason, for Richard to usurp the throne is that he had the character and means to take such action - ...read more.

And although the rivalry between Gloucester and Woodville proved deadly, yet it was not immediately apparent on Edward IV's death. Hastings warned Gloucester to act to defend his position when the Woodville's tried to alter Edward IV's will. Richard was convinced of the legality of his claim to the throne and that Edward IV's children had no legitimate claim. He believed this because of the illegitimate marriage between Elizabeth Woodville and Edward IV. Richard believed this so called illegitimacy because, he discovered that his late brother had agreed to marry another woman before he married his Queen, Elizabeth Woodville. ...read more.

Rumour has it that Richard III murdered the brothers as a way of securing his position of being next onto the throne. In conclusion the reason as to why Richard wanted the throne was that he felt jealous of the fact that he was defiantly superior to his brother's children and to the fact that he thought the children was illegitimate to gain the throne. This is why Richard decided to lock them away and to be announced king so that people would realise that he was the true heir to the throne. BY CHARLIE LIFE ...read more.