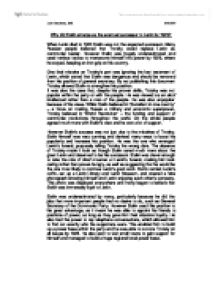 Why did Stalin emerge as the eventual successor to Lenin by 1929?

Why did Stalin emerge as the eventual successor to Lenin by 1929? When Lenin died in 1923 Stalin was not the expected successor. Many Russian people believed that Trotsky would replace Lenin as communist leader. However Stalin was hugely underestimated and used various tactics to manoeuvre himself into power by 1929, where he stayed, keeping an iron grip on his country. One fatal mistake on Trotsky's part was ignoring the last testament of Lenin, which stated that Stalin was dangerous and should be removed from his position of general secretary. By not publishing this document Trotsky allowed Stalin to strengthen his position. ...read more.

However Stalin's success was not just due to the mistakes of Trotsky. Stalin himself was very cunning and devised many ways to boost his popularity and increase his position. He was the one who arranged Lenin's funeral, purposely telling Trotsky the wrong date. The absence of Trotsky made it look as though Stalin cared much more about the great Lenin and deserved to be his successor. Stalin was clever enough to take the role of chief mourner at Lenin's funeral, making him look caring rather than power-hungry, as well as suggesting that he would be the one most likely to continue Lenin's good work. ...read more.

He also had the power to tap telephone conversations, which allowed him to find out exactly who his supporters were. This enabled him to build up a power base within the party and he was able to outvote Trotsky on all issues by 1925. He also went to visit small towns to gain support for himself and managed to build a huge regional level power base. Stalin was also ruthless; he had no interest in sharing power, but was obsessed with having it all himself. He systematically got rid of the other members of the party, using the rightists to help him get rid of Trotsky and the other leftists, then turning on the rightists! Lula Teunissen, 10H 01/05/07 ...read more.