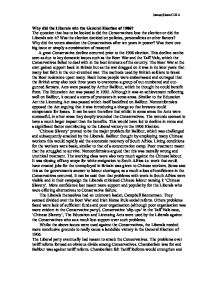 Why did the Liberals win the General Election of 1906?

Why did the Liberals win the General Election of 1906? The question that has to be looked is did the Conservatives lose the election or did the Liberals win it? Was the election decided on policies, personalities or other factors? Why did the voters abandon the Conservatives after ten years in power? Was there one big issue or simply a combination of reasons? A great Conservative decline occurred prior to the 1906 election. This decline can be seen as due to key domestic issues such as the Boer War and the Taff Vale, which the Conservatives failed to deal with in the best interests of the country. The Boer War at the start gained support back in Britain but as the war dragged on it was in its later years that many lost faith in the out-stretched war. ...read more.

'Chinese Slavery' proved to be the major problem for Balfour, which was challenged and subsequently attacked by the Liberals. Balfour thought by employing many Chinese workers this would rapidly aid the economic recovery of South Africa. Living conditions for the workers were basic, similar to that of a concentration camp. Poor treatment meant that the struggled to survive. Nonconformists argued that this was morally wrong and unethical treatment. The working class were also very much against the Chinese labour. It was closing off any scope for white emigration to South Africa i.e. work that could have created jobs for the unemployed in Britain was given to Chinese workers. Some saw this as the governments answer to labour shortages; as a result a loss of confidence in the Conservatives occurred. It can be said then that problems with work in South Africa were visible and in their campaign the Liberals criticised Chinese labour naming it 'Chinese Slavery'. ...read more.

Chamberlain felt Tariff Reform would strengthen and build up British industry. Balfour saw no guarantee that it would work and less choice would become available. The Liberals stepped in; they were united in their new idea of free trade, which was seen as a good alternative to the problem struck Conservative's tariff reform. Therefore the outright factor that caused a Liberal victory in the 1906 election was the failure in key areas of the Conservative party. Their not so well thought out ideas and failure to provide social reform meant that many lost confidence in the Conservatives and looked to other parties, i.e. the Liberals. The Liberals themselves attacked Conservative problems that arose and with their own none radical ideas gained increased support prior to the 1906 elections. Both criticism of Conservatives (especially Chinese Slavery and Tariff Reform) and their own well-backed policies made for a strong election campaign. This in-turn increased support for the Liberals resulting in the famous landslide victory of 1906. James Sloan CiK 4 ...read more.

The author is fairly strong on Conservative weakness but only offers a partial explanation of Liberal strength, overlooking the appeal of their promised reform package. Some explanations could be more detailed. 3 out of 5 stars.