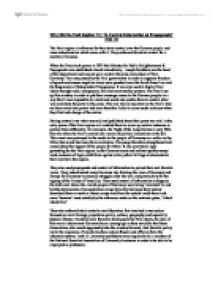 Why did the Nazi Regime try to control information?

Why Did the Nazi Regime Try To Control Information & Propaganda? 1933-39 The Nazi regime is infamous for their strict control over the German people, and mass indoctrination which came with it. They enforced this strict control for a number of reasons. When the Nazis took power in 1933 the Ministry for Public Enlightenment & Propaganda was established almost immediately. Joseph Goebbels was the head of this department and was set up to control the press and culture of Nazi Germany. Two acts passed by the Nazi government in order to suppress freedom of speech and ensure negative views were quashed were the Reich Press Law and the Suspension of Independent Newspapers. It was also used to display Nazi ideals through radio, newspapers, film and most notably posters. The Nazi's set up this ministry in order to put there message across to the German peoples in a way that it was impossible to avoid and would also enable them to control what was said about the party in the press. ...read more.

They used control of information to disguise the truth over where the Jewish people of Germany were being 'relocated' to and hid the dark secrets of concentration camps from the Germans they instead described them as work or labour camps and from the outside made them look more 'humane' most notably by the infamous motto on the entrance gates, 'Arbeit Macht Frei' They also enforced strict controls over Education, this involved a curriculum focused on racial biology, population policy, culture, geography and especially physical fitness. Teachers were forced to teach pupils the Nazi ideals, the idea of this was to indoctrinate Germans from a young age as they would be the future Generations who would supposedly take the country forward. Anti-Semitic policy led to the expulsion of Jewish teachers and professors and officials from the education system. And all University professors were required to be a member of the National Socialist Association of University Lecturers in order to be able to be employed as professors. ...read more.

They also used the games to bring attention to how grand the games was, this was done by building a huge stadium and the first ever Olympic opening ceremony, this was all done to show off how 'great' Germany was. In conclusion, the Nazi regime controlled information and propaganda because they wanted a one party state and a regime of fear. By controlling everything about German culture and what was seen and heard enabled them to become the only option for German people and therefore their support was unprecedented as there was no opposition. The early need for propaganda was to consolidate their power. It also meant that the German people saw what the Nazi's wanted them to see and the same of the rest of the world. This area of the Nazi regime is summed up well by the phrase Gleichschaltung meaning "coordination", "making the same", "bringing into line", this is a Nazi term for the process by which the Nazi regime successively established a system of totalitarian control over the individual, and tight coordination over all aspects of society and commerce. Dom Ansell L6P ...read more.