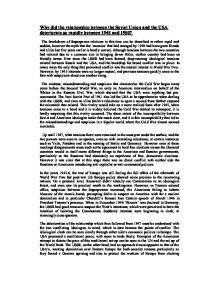 Why did the relationship between the Soviet Union and the USA deteriorate so rapidly between 1945 and 1950?

Why did the relationship between the Soviet Union and the USA deteriorate so rapidly between 1945 and 1950? The breakdown of Superpower relations in this time can be described as rather rapid and sudden, however the myth that the 'enemies' that had emerged by 1950 had been great friends and allies but five years earlier is hardly correct, although tensions between the two countries had relaxed due to a common aim in bringing down Hitler, neither country had been on friendly terms. Ever since the USSR had been formed, deep-running ideological tensions existed between Russia and the USA, and the backdrop for broad conflict was in place. In many ways the only thing that prevented conflict was the mutual interest in World War Two. However, by 1945 interests were no longer mutual, and previous tensions quickly came to the fore with suspicions about one another rising. The mistrust, misunderstanding and suspicion that characterise the Cold War began many years before the Second World War, as early as American intervention on behalf of the Whites in the Russian Civil War, which showed that the USA were anything but pro-communist. ...read more.

However it was clear that at this stage there was no direct conflict with neither side the Russians or Americans introducing anti-capitalist or anti-communist policies. In the years 1945-6, the rest of Europe was still feeling the full effect of the aftermath of World War Two but post-war US foreign policy showed some promise to the recovering nations. On a personal level, Roosevelt didn't actually see Communism as an ideological threat, and even saw its practical worth to the workingman. However, as Truman entered office, suspicion between the Superpowers increased; the Americans failing to inform Moscow of the atomic bomb, prompting Stalin to suspect an American wish for a nuclear domination and in particular Churchill's famous Iron Curtain speech of March 1946 in President Truman's presence. When in December 1946 'Bizonia' was declared in Germany, the USSR had good reason to suspect the West's intentions, which were perceived to have the intention of isolating the Communists. Suddenly interests were beginning to clash, at alarmingly close quarters. The deterioration of the relationship which then followed from 1947 must be understood with the two conflicting ideologies in mind, which in turn became the points of conflict. ...read more.

The Russians saw America's Marshall Aid of March 1947, along with the Truman Doctrine, as Dollar Imperialism from the USA, prompting Moscow to exert a tighter policy in the Eastern Bloc, what they regarded as an absolutely necessary buffer zone for their own national security. In the aftermath of the Second World War the US was sure to take firmer action and thus ideas regarding the 'containment' of Communism were born, to counter the effects of the 'Domino Theory' which the capitalist world so feared. Bu 1950 both sides had begun to counter one another's measures, and relations between the USA and the USSR had seriously deteriorated. Already in 1948 the Russians had blockaded Berlin and by 1950 tensions were growing over Korea. The fears for one another can be put down to their fear of each other as well as some misinterpretation. With such deep-rooted misunderstandings in the first place, any peace deals or treaties were most unlikely, and with the nuclear age in its youth the age of brinkmanship, first really seen in Berlin in 1948, continued to follow over the next twenty years. ...read more.