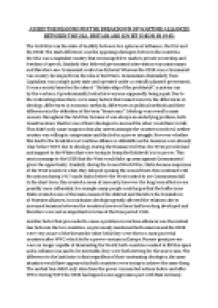 ASSESS THE REASONS FOR THE BREAKDOWN OF WARTIME ALLIANCES BETWEEN THE USA, BRITAIN AND SOVIET UNION IN 1945

﻿ASSESS THE REASONS FOR THE BREAKDOWN OF WARTIME ALLIANCES BETWEEN THE USA, BRITAIN AND SOVIET UNION IN 1945: The Cold War was the state of hostility between two spheres of influence, the USA and the USSR. The stark difference was the opposing ideologies between the countries, the USA was a Capitalist country that encouraged free market, private ownership and freedom of speech. Similarly they believed government intervention was unnecessary and therefore saw Communist control as dictorial. Whereas the USSR was a Communist run country developed from the idea of Karl Marx. Communism dissimilarly from Capitalism was a single party state and operated under a centrally planned government. It was a society based on the idea of ?dictatorship of the proletariat?, a system run by the workers, it predominantly looked at everyone supposedly being equal. Due to the contrasting ideas there were many factors that caused concern, the differences in ideology, differences in economic methods, differences in political methods and their differences in the definition of the term ?democracy?. Ideology was overall a main concern throughout the Cold War because it was always an underlying problem, both Countries knew that for one of their ideologies to succeed the other would have to fall. This didn?t only cause suspicion but also unrest amongst the countries involved, neither country was willing to compromise and this led to a power struggle. ...read more.

On the other hand the USSR had suffered tremendously during the war (2.5 million killed, 1700 cities ruined) and Stalin believed they had been treated badly which led to a Soviet sense of entitlement that not everybody agreed to. Stalin and the USSR were also considerably known for a sense of paranoia and need for security due to Russia having being invaded twice already. Stalin?s paranoia caused problems in relationship due to the miscommunication, America saw Stalin?s need for security as a way of dominating Europe whereas Stalin was more concerned with protecting the USSR than World domination. This epitomised the lack of understanding the countries had for each other and led to long term problems such as the Berlin Crisis and Atomic Bomb. The mutual fear between the countries was a bigger reason for the breakdown of the wartime alliances in 1945. This is because the mutual fear meant the countries weren?t able to establish and negotiate problems effectively which led to them trying to deceive each other. The change in leaders during 1945 also affected the breakdown in wartime alliance. During WW2, Roosevelt had a working relationship with Stalin that relied on negotiation and compromise. However when Truman replaced Roosevelt he believed that there needed to be a much more hard-line approach. ...read more.

Potsdam focused on the details of the boundaries between the zones and this caused conflict as new leader Truman didn?t believe Stalin was serious about working as a partnership and was more interested in looking after himself and the USSR. America and Britain were also alarmed as countries in Eastern Europe were becoming more and more communist. The Potsdam conference was important as it sowed the seeds for the future discontent between the free powers and the Russians. Stalin wanted the allied powers to recognise the governments of Bulgaria, Hungary and Romania which were then laboured under Russian Control. The Yalta and Potsdam conferences did add to the breakdown in wartime alliances because the Atomic bomb and breaking of promises made each country fear each other more so. However it is arguable that if Roosevelt had still been in power then there would have been no disagreement or breakdown because of the decisions already made and the working relationship. In conclusion the main reason for the breakdown in the wartime alliance was the change in leaders. Truman felt that he needed to prove himself and therefore fought so hard for power that he no longer considered the consequences. This combined with Stalin?s paranoia meant the communication between the countries broke down even further and the already built up hostility therefore turned to fear. ...read more.