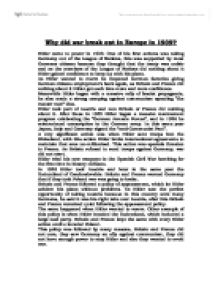 Why did war break out in Europe in 1939? Hitler came to power in 1933. One of his first actions was taking Germany out of the League of Nations, this was supported by most Germans citizens because they thought that the treaty was unfair and as the members of the League of Nations did nothing about it Hitler gained confidence to keep up with his plans. As Hitler wanted to rearm he reopened German factories giving German citizens employment's back again, as Britain and France did nothing about it Hitler got each time more and more confidence. Meanwhile Hitler began with a massive rally of fascist propaganda, he also made a strong camping against communism speeding "the master race" idea. ...read more.

Britain and France warned Germany that if they took Poland war was going to brake. Britain and France followed a policy of appeasement, which let Hitler achieve his plans without problems. As Hitler saw the perfect opportunity of taking Austria because in this country were many Germans, he said it was his right take over Austria, after this Britain and France remained quiet following the appeasement policy. The same happened when Hitler wanted to rearm. Other example of this policy is when Hitler invaded the Sudentland, which included a large nazi party. Britain and France kept the same with every Hitler action until e invaded Poland. This policy was followed by many reasons, Britain and France did not care, they saw Germany an ally against communism, they did not have enough power to stop Hitler and also they wanted to avoid war. ...read more.

Stalin decided that the Soviet interests would be saved by an agreement with Germany, so in 1938 Ribbentrop flew to Moscw for talks with Stalin. On August 1939 the two powers signed the "Nazi-Soviet Pact" in which they agreed not to attack each other and also agreed to divide Poland between them. The Treaty of Versailles had a great impact in World War II, this treaty made Germany pay for all the damages caused in World War I to the winning countries. After this unfair trail German citizens had a feeling of revenge, unfairness and economic deprivation. As Hitler offered the supposed solution to their rage by attacking the Jews, enlarging German territory and destroying communism as well as revenge form the Nations that had defeated them in WWI. Pablo Hern�ndez Chac�n ...read more.