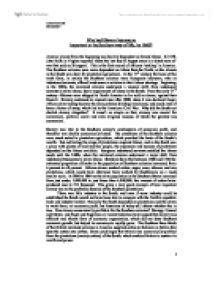 Why had Slavery become so Important to the Southern way of life, by 1860?

Why had Slavery become so Important to the Southern way of life, by 1860? America almost from the beginning was heavily dependent on forced labour. In 1619, John Rolfe in Virgina reported 'about the last day of August came in a butch man-of-war that sold us 20 negers'. This is the first record of Africans 'settling' in America. The Southern colonies were more dependent on labour then the North, as the climate in the South was ideal for plantation agricultural. In the 17th century the basis of the work force, in mainly the Southern colonies were Europeans labourers, who as indentured servants, offered landowners a solution to their labour shortage. Beginning in the 1680s, the mainland colonies underwent a massive shift, from indentured servants to slave labour, due to requirement of labour in the South. From the early 17th century Africans were shipped to North America to be sold as slaves, against their freewill. Slavery continued to expand even after 1808, when it was declared illegal. African slave trading became the main problem dividing Americans, and could even of been a factor of many, which led to the American Civil War. Why did the South not abolish slavery altogether? It wasn't as simple as that; slavery was crucial for economical, political, social and even religious reasons; of which the greatest was economical. ...read more.

Slaves emerged to fill gaps of population as the small existing Southern population was widely distributed. While slaves satisfied labour needs, Southerners had the chance to rise up the social ladder, to expand their plantations westwards and become economically stronger. The Southerners viewed slavery as traditional, and saw it as their way of life. America had always been dependent on coerced labour, and by the early 18th century slavery, was the dominant labour system of the Southern colonies. Most of the Founding Fathers were large-scale slave owners, including George Washington 'Father of his country', and Thomas Jefferson, who proclaimed in the Declaration of Independence that 'all men are created equal'. Also eight of the United States' first twelve presidents, in office for 49 of the new nation's first 61 years, were slaveholders. This just shows how most Southerners were likely to of had an experience of slave labour, and the benefactors of it. Slavery in the U.S.A was portrayed as the most beneficial form of slavery that had ever existed. Abolitionists, (people who wanted to rid the U.S.A of slavery), were depicted as irresponsible revolutionaries, trying to destroy the American Republic, and were driven to the North. A small reason why slavery was seen as acceptable in the Southern colonies was the political situation it created for the South. Most Southerners were totally committed to their peculiar institution, as they called slave labour. ...read more.

Most Southerners feared that an end to slavery would result in economic collapse, social disintegration and race war. Southerners feared this so much that they were prepared to wage a terrible 4-year war in an effort to maintain slavery. Even though after the war, and the end of slavery, the South didn't collapse. So overall I have concluded that the main reason slavery had become so important to the Southern way of life was that the Southerners didn't know any other way of life. They had had slavery since the beginning and therefore thought it was the correct way of life. The Southerners saw no reason to change their way of life, and also I think they believed that their society would collapse without slave labour- this obviously wasn't the case. Also the Southerners benefited from the slave population, which allowed more politicians into the Lower House of Representatives. The colonists of the South saw Africans as 'savage' and 'uncivilised', they thought that the Africans were better off enslaved in American, than a freeman in their country of origin. So basically American Southerners thought they were helping Africans, as well as helping themselves. I believe that there was really no need for slavery to exist at all. I'm sure that the early settlers would have been able to survive without slavery or forced labour. I think slavery was an excuse to show racial dominance, and power. What if slavery hadn't existed would America still be the same as it is today? Laura Curnock 03/05/2007 I ...read more.