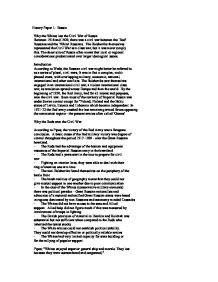 Why the Whites lost the Civil War of Russia.

History Paper 1: Russia Why the Whites lost the Civil War of Russia Between 1918 and 1920, there was a civil war between the `Red' Russians and the `White' Russians. The Bolsheviks themselves represented the Civil War as a class war, but it was never simply this. The sheer size of Russia often meant that local or regional considerations predominated over larger ideological issues. Introduction According to Wade, the Russian civil war might better be referred to as a series of plural, civil wars, It was in fact a complex, multi- phased event, with overlapping military, economic, national, international and other conflicts. The Bolsheviks saw themselves engaged in an international civil war, a violent international class war, as revolution spread across Europe and then the world. By the beginning of 1920, the Red Army, had for all intents and purposes, won the civil war. Soon most of the territory of Imperial Russia was under Soviet control except for "Poland, Finland and the Baltic states of Latvia, Estonia and Lithuania which became independent. In 1921-22 the Red army crushed the last remaining armed forces opposing the communist regime - the peasant armies often called 'Greens' Why the Reds won the Civil War According to Pipes, the victory of the Red Army was a foregone conclusion. ...read more.

Trotsky, the Commissar of War, was chiefly responsible for the successful military operations. He exercised a central command over the whole army, emphasizing discipline and obedience. The commanders of the Red Army were staffed with former Tsarist officers who were willing to co-operate. Officers were punishable by death if they were defeated in a single battle. Fear of death compelled the Red Army to fight bravely. In contrast, the White Army had poor discipline. They were uncoordinated in their war efforts. The White Army took food from the peasants and so did not have economic support from the peasants. The workers rallied behind the Bolsheviks. They peasants did the same because they feared that once the Whites were in power, they would repudiate the Bolsheviks' decree of giving land to them. 1. Disunity of the White armies Pipes: "the critical advantage the Reds enjoyed was that they were one and their enemies many." � The various White armies fought as separate detachments. The White General often acted independently and were thus unable to coordinate his command � They had a common aim: to overthrow the Bolsheviks, that was all. ...read more.

Indeed, by the end of the Civil War whatever initial peasant sympathy they had gained had been lost by the severity of their grain- requisitioning methods. It was that the Whites failed to present themselves as a better alternative � The Whites advocated the return to the pre-revolutionary past � The Reds spread the propaganda that the lands which the peasants seized would be forfeited if the Whites regained power 5. Morale of the army of the Reds and Whites were badly affected by poor leadership and infighting I � Trotsky created an army which proved capable of fighting; they had an unshakeable belief in their own victory � Whites on the other hand, uncoordinated collection of separation forces � The Red Army was the military arm of a civilian government whereas the White armies were a military force that also had to act as a government � The political differences between the uncertain grouping of dispossessed socialists, liberals and moderates made sure that they stayed disunited; in fact led them to bitter disputes � Hence, the Whites deeply divided: those who were fighting for local separatism versus those who wanted a return to strong central government � The Whites lacked leadership. No White leader of the stature of Trotsky or Lenin emerged, around whom an effective anti-Bolshevik army could unite ...read more.