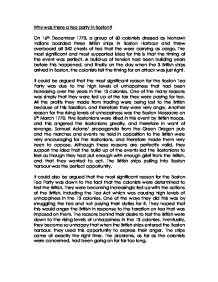 Why was there a tea party in Boston? It could also be argued that the most significant reason for the Boston Tea Party was down to the fact that the colonists were determined to test the British.

Why was there a tea party in Boston? On 16th December 1773, a group of 60 colonists dressed as Mohawk Indians boarded three British ships in Boston Harbour and threw overboard all 342 chests of tea that the were carrying as cargo. The most significant and most supported idea for this is that the timing of the event was perfect. A build-up of tension had been building years before this happened, and finally on the day when the 3 British ships arrived in Boston, the colonists felt the timing for an attack was just right. It could be argued that the most significant reason for the Boston Tea Party was due to the high levels of unhappiness that had been increasing over the years in the 13 colonies. ...read more.

Samuel Adams' propaganda from the Green Dragon pub and the marches and events he held in opposition to the British were very encouraging for the Bostonians, and therefore made them very keen to oppose. Although these reasons are perfectly valid, they support the idea that the build up of the events led the Bostonians to feel as though they had put enough with enough grief from the British, and that they wanted to act. The British ships pulling into Boston harbour was the perfect opportunity. It could also be argued that the most significant reason for the Boston Tea Party was down to the fact that the colonists were determined to test the British. ...read more.

Eventually, they become so unhappy that when the British ships entered the Boston harbour, they used this opportunity to express their anger. The ships came at exactly the right time. The problems, as far as the colonists were concerned, had been going on for far too long. All of the above are perfectly valid reasons why the Boston Tea Party took place. However, the idea of perfect timing seems to link most firmly with the other two reasons. The colonists were becoming increasingly upset with their situation and therefore when the ships pulled into Boston harbour, they saw this as a perfect opportunity to express their anger to the British after holding back their grievances for so long. This was their attempt at testing the British by standing up to them. ...read more.