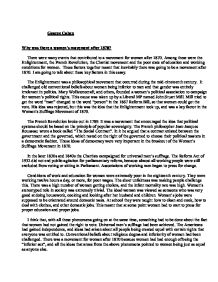 Why was there a women's movement after 1870

George Cohen Why was there a women's movement after 1870? There were many events that contributed to a movement for women after 1870. Among these were the Enlightenment, the French Revolution, the Chartist movement and the poor state of education and working conditions for women. These factors together meant that inevitably there was going to be a movement after 1870. I am going to talk about these key factors in this essay. The Enlightenment was a philosophical movement that occurred during the mid-nineteenth century. It challenged old conventional beliefs about women being inferior to men and that gender was entirely irrelevant in politics. Mary Wollstonecraft, and others, founded a women's political association to campaign for women's political rights. ...read more.

The French philosopher Jean-Jacques Rousseau wrote a book called "The Social Contract". In it he argued that a contract existed between the government and the governed, which rested on the right of the governed to choose their political masters in a democratic fashion. These ideas of democracy were very important in the breakout of the Women's Suffrage Movement in 1870. In the later 1830s and 1840s the Chartists campaigned for universal men's suffrage. The Reform Act of 1932 did not end public agitation for parliamentary reform, because almost all working people were still excluded from voting or sitting in Parliament. Associations of working men began to press for change. Conditions of work and education for women were extremely poor in the eighteenth century. ...read more.

At school they were taught how to clean and cook, how to deal with clothes, and other domestic jobs. This meant that at some point women had to start to press for proper education and proper jobs. I think that, with all these phenomena going on at the same time, something had to be done about the fact that women had not gained the right to vote. Universal men's suffrage had been achieved. The Americans had gained independence, and ideas had arisen about all people being created equal with certain rights that everyone was entitled to. Conventional beliefs about religious dogma and inferiority of women had been challenged. There was a movement for women after 1870 because women had had enough of being the "inferior sex", and all the ideas that arose from the above phenomena pointed to women being just as equal as anyone else. ...read more.