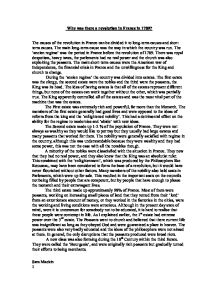 Why was there a revolution in France in 1789

Why was there a revolution in France in 1789? The causes of the revolution in France can be divided it to long-term causes and short term causes. The main long-term cause was the way in which the country was run. The 'ancien regime' was the period in France before the revolution of 1789. There was royal despotism, heavy taxes, the parlements had no real power and the church was also exploiting the peasants. The main short-term causes were the American war of Independence, the financial crisis in France and the unwillingness for the King and church to change. During the 'ancien regime' the country was divided into estates. The first estate was the clergy, the second estate were the nobles and the third were the peasants, the King was its head. The idea of having estates is that all of the estates represent different things, but none of the estates can work together without the other, which was partially true. The King apparently controlled all of the estates and was the most vital part of the machine that was the estates. The First estate was extremely rich and powerful, far more than the Monarch. The members of the first estate generally had good lives and were opposed to the ideas of reform from the king and the 'enlightened nobility'. This had a detrimental effect on the ability for the regime to modernise and 'abide' with new ideas. ...read more.

The parlements were granted more power by Louis XV but towards the end of his reign they were once again made powerless. All of the above are political, Geographical divides, the religious divides were also relatively numerous. There were 18 Arch Diocese, with an Arch Bishop in charge of each, and within there were 136 Diocese. Not only were there political and religious divides, there were also less official divides, such as the south of France used common law and the North used Roman Law, different areas followed different rules, there were even different sets of measures in the different areas. All of these factors meant that different parts of France were like entirely different countries. This alone made it hard for France to reform, without the further inconvenience of people's unwillingness to reform. The ancien regime was named after the revolution to describe the 'era' before the revolution. During this time, the King was an Absolutist leader. The basic principles of absolutism are that the Monarch rules by divine right and decides what is best for the state, he has unlimited power and everyone should be loyal to him, the Monarch should dominate the cultural world and censor what he deems unsuitable. Louis XVI was an absolutist. The effects of absolutism were evidentially, devastating to Louis XVI. The effects of absolutism were royal despotism, the King was unable to recognise that his actions did have consequences. ...read more.

This did not go to plan and the Nobles denied the law. Brienne, who was the Arch Bishop of Toulouse, replaced Calonne in April 1787. Calonne continued to attempt to pass Calonne's law, although it did have a new name and was slightly adjusted, and this time the Assembly of Notables asked for more information about the law, the King refused and claimed that they were questioning his authority and so decided to dismiss the assembly in May, 1787, which also led to an ever increasing list of problems. The king was now unable to pass his law and the nobles were calling for the estates general to be passed. The estates general was called in 1789, were Necker is recalled, but no real solutions are formed. The third estate started to decide that it deserved more power and respect than it got, the second estate was divided between agreeing with the reforming 3rd estate and the traditional 1st estate and the Kings role becoming ever less important. After answering the question, 'Why was there a revolution in France in 1789?' I have come to the conclusion that the primary reason was the social and political structure in France during the ancien regime and the fact that nobody was willing reform when they should have. Instead they waited until it was too late and the inevitable happened, there was a revolution, which was also turned out to be long lasting and damaging to every aspect of French society. Sam Mackin 1 ...read more.