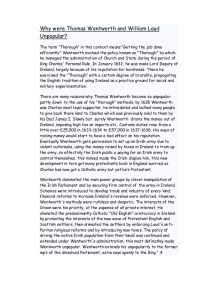 Why were Thomas Wentworth and William Laud Unpopular?

Why were Thomas Wentworth and William Laud Unpopular? The term "Thorough" in this context means "Getting the job done efficiently" Wentworth evolved the policy known as "Thorough" by which he managed the administration of Church and State during the period of King Charles' Personal Rule. In January 1632, he was made Lord Deputy of Ireland, largely because of his reputation for harshness. There he exercised the "Thorough" with a certain degree of brutality, propagating the English tradition of using Ireland as a practice ground for social and military experimentation. There are many reasons why Thomas Wentworth became so unpopular, partly down to the use of his "thorough" methods, by 1628 Wentworth was Charles most loyal supporter, he intimidated and bullied many people to give back there land to Charles which was previously sold to them by his Dad James I. Slowly but surely Wentworth drains the money out of Ireland, imposing high tax on imports etc.. ...read more.

as Wentworth is a strong beliver of the divine right of Kings, he believes the king can do what ever he wants to raise money as the parliament refused him funds, this will do him no favours for popularity as he is encouraging the king to go against parliament rules. There are also many reasons why William Laud has become unpopular, Laud argued that the king ruled by Divine Right. He claimed that the king had been appointed by God and people who disagreed with him were bad Christians. Laud believed that Church reforms had gone too far. Anglicans tended to support the policies of Laud but the Puritans strongly disagreed with him. When Laud gave instructions that the wooden communion tables in churches should be replaced by stone altars. Puritans accused Laud of trying to reintroduce Catholicism. Laud's policy was influenced by another aspect of his character: his desire to impose total uniformity on the Church. ...read more.

In 1630, Alexander Leighton was fined, pillorised and mutilated (slashed, ears cut off etc...) for producing pamphlets saying how Laud is not doing a good job of "restoring the fabric of the church" but the people he punished were seen as hero's to the other puritans, these brutal punishments certainly made Laud even more unpopular. In conlusion of all of this information, I have been able to explore all the reasons why both Thomas Wentworth and William Laud became and were so unpopular. Wentworth was unpopular largely down to his bullying and "thorough" tactics as well as imposing higher taxes in Ireland. Laud was unpopular mainly due to his desire to impose total uniformity on the Church, as well as his harsh punishments imposed mainly on the Puritans. Both of these people were hard headed and "thorough" in what ever they did, because of this many of there methods of dealing with different situations, whether it be dealing with getting landowners to give back land which was sold to them by James I or dealing with defamation using mutilation, made them become very unpopular with many people. ...read more.