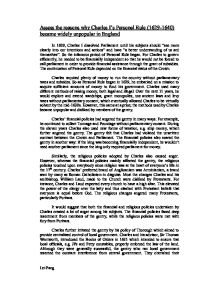 Assess the reasons why Charles I's Personal Rule (1629-1640) became widely unpopular in England In 1629, Charles I dissolved Parliament until his subjects should "see more clearly into our intentions and actions" and have "a better understanding of us and themselves". So the infamous period of Personal Rule began. For Charles to govern efficiently, he needed to be financially independent so that he would not be forced to call parliament in order to provide financial assistance through the grant of subsidies. The continuation of Personal Rule depended on the financial status of the Crown. Charles required plenty of money to run the country without parliamentary taxes and subsides. So as Personal Rule began in 1629, he embarked on a mission to acquire sufficient amounts of money to fund his government. Charles used many different methods of raising money, both legal and illegal. Over the next 11 years, he would explore and extend wardships, grant monopolies, use ancient laws and levy taxes without parliamentary consent, which eventually allowed Charles to be virtually solvent by the mid-1630s. However, this came at a price; the methods used by Charles became unpopular and disliked by members of the gentry. Charles' financial policies had angered the gentry in many ways. For example, he continued to collect Tonnage and Poundage without parliamentary consent. During the eleven years Charles also used new forms of taxation, e.g. ...read more.

For instance, the Protestants disliked the religious changes, the gentry didn't enjoy the constant interference from central government, and they were also worried about the financial status of the Crown. Another reason for the unpopularity of Personal Rule was that not only did the policies increase resentment but they also enhanced fears of absolutism. Charles' financial policies showed examples of arbitrary government. For example, he collected Tonnage and Poundage without parliamentary consent. He also exploited the grant of monopolies, wardships, Ship Money, etc. All this had allowed Charles to be solvent by the mid-1630s. Financial independence was a feature of absolutism. Charles had achieved this financial independence through unpopular policies such as Ship Money. The religious changes to the Church perhaps best represent the growing fears of absolutism. In 17th century Europe, Catholicism and absolutism went hand in hand. Countries in Europe, such as France and Spain, were Catholic and had an absolute monarch as well. So any movement towards Catholicism increased fears of absolutism. As Charles' preferred brand of Anglicanism was Arminianism, Charles exclusively promoted Arminians at the expense of other men from other religious factions. This increased fears of Catholicism (because of the closeness of Catholicism and Arminianism). Fears of Catholicism were also heightened with the growing Catholic influence in the court. The Queen, Henrietta Maria, was a Catholic, and allowed to practise her religion in the court, as was members of the Privy Council, such as Lord Treasurer Weston. ...read more.

Furthermore, the prerogative courts were used to enforce unpopular religious measures (a trait of absolutism). Across the Irish Sea, these actions struck fear in the eyes of many English aristocrats. Many members of the gentry became ever more fearful of what was happening in Ireland might be replicated by Charles in Personal Rule. It is clear that Thorough increased concerns of absolutism. Alongside the financial and religious policies, they suggest that Charles wanted absolutism in England. However, these policies didn't necessarily mean that Charles wanted to be an absolute monarch. To govern the country without parliamentary endorsement, he needed money. Charles preferred beauty, ceremony, ritual and obedience in the church instead of the plain, simple, democratic Protestant church but that didn't make a Catholic. If he were to govern efficiently, he had to have centralized control of local government. Therefore, we can see that the people's worries actually enhanced the fears of absolutism more than Charles' actions. In conclusion, there are two main reasons why Personal Rule was so unpopular. The first is that the policies employed by Charles became resented by both members of the gentry and peasantry. Secondly, although he didn't mean for it, his policies led to an expansion of the fear of absolutism. This was fuelled by the fact that his wife and members of the Privy Council were actual Catholics. Both reasons contributed to the unpopularity of Personal Rule. The fears of absolutism came from a false image created by the unpopular policies which had angered many people in England. ?? ?? ?? ?? Lei Pang ...read more.