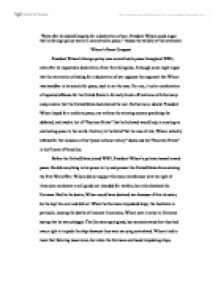 "Even after he asked Congress for a declaration of war, President Wilson could argue that his foreign policy was still committed to peace." Assess the validity of this statement. Wilson's Peace Conquest President Wilson's foreign policy was committed to peace throughout WW1, even after he requested a declaration of war from Congress. Although some might argue that the very action of asking for a declaration of war opposes the argument that Wilson was steadfast in his search for peace, such is not the case. For one, it took a combination of repeated offences for the United States to formally break off relations with Germany and proclaim that the United States had entered the war. Furthermore, idealist President Wilson hoped for a uniform peace, one without the winning country punishing the defeated, and made a list of "Fourteen Points" that he believed would help in creating an everlasting peace in the world. Contrary to the belief that he was all talk, Wilson valiantly lobbied for the inclusion of his "peace without victory" ideals and his "Fourteen Points" in the Treaty of Versailles. Before the United States joined WW1, President Wilson's policies leaned toward peace. ...read more.

Instead, Wilson seemed to double his efforts to achieve world wide peace. In January of 1917, when American citizens began to realize that the United State's entrance into WW1 was inevitable, Wilson gallantly stated that the "United States would insist on a 'peace without victory'" (457 AP Prep Book). When the United States joined the raging war against Germany, President Wilson wrote his "Fourteen Points." His Fourteen Points enumerated the goals he wished to accomplish by going to war. Holding true with his ultimate ambition of peace, all of Wilson's points intended to bring about a lasting peace. Some of his points included "recognition of freedom of the seas", "an end to the practice of secret treaties", and a "reduction of national armaments" (456 AP Prep Book). In Wilson's eyes, the most important point was the fourteenth. It made provisions for " 'A general association of nations... for the purpose of affording mutual guarantees of political independence and territorial integrity to great and small states alike,'" or more specifically, a League of Nations (457 AP Prep Book). Each of the points, in some way, focused on making the world more peaceful, a task that Wilson himself was attempting to accomplish through other actions as well. ...read more.

President Wilson's foreign policy remained constant throughout the First World War. From the very beginning, he was committed to peace. Even before the United States was officially involved in the war, Wilson attempted to keep peace between America, Germany, and Great Britain. He gave Germany multiple chances to stop antagonizing the United States before he appealed for a declaration of war from Congress. Yet even during the war, Wilson's peace policy did not change. At one point he stated that the United States would only accept "peace without victory," proving once again his peace committed foreign policy. Wilson also made a list of Fourteen Points that he thought would help him accomplish his world-wide peace dream. President Wilson, at the writing of the Treaty of Versailles, nobly defended his peace objectives against formidable other countries intent on revenge. He was even able to get one of his points, the one providing for the League of Nations, into the treaty in its entirety. Nevertheless, Wilson's persistent attempts to achieve world-wide peace show that although he did ask for a declaration of war, he retained his idealist beliefs and fought for peace. ...read more.