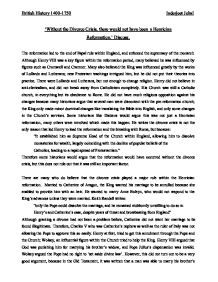 'Without the Divorce Crisis, there would not have been a Henrician Reformation.' Discuss.

British History 1400-1750 Inderjeet Johal 'Without the Divorce Crisis, there would not have been a Henrician Reformation.' Discuss. The reformation led to the end of Papal rule within England, and enforced the supremacy of the monarch. Although Henry VIII was a key figure within the reformation period, many believed he was influenced by figures such as Cromwell and Cramner. Many also believed the King was influenced greatly by the works of Lollards and Lutherans; new Protestant teachings intrigued him, but he did not put their theories into practice. There were Lollards and Lutherans, but not enough to change religion. Henry did not believe in anti-clericalism, and did not break away from Catholicism completely. His Church was still a Catholic church, in everything but its obedience to Rome. He did not have much religious opposition against his changes because many historians argue that several men were discontent with the pre-reformation church; the King only made minor doctrinal changes like translating the Bible into English, and only some changes in the Church's services. Some historians like Dickens would argue this was not just a Henrician reformation, many others were involved which made this happen. He writes the divorce crisis is not the only reason that led Henry to lead the reformation and the breaking with Rome, but because: "It established him as Supreme Head of the ...read more.

Pre-reformation church was seen as a corrupt and failing institution. Henry VIII allowed three anti-clerical bills to be passed, giving him great power over the clerics, and allowing him to reform church practices. Many historians argue that the people of the early 16th century agreed with Henry's decision because the Church was very unpopular. Anti-clericalism was widespread and popular. The clergy were widely despised, and Archbishops and Bishops were not liked because of their wealth. Bishops were seen to be ignoring their chastity by having mistresses and illegitimate children. The lower clergy and Parish priests were seen as ignorant. However, the clergy were very important for a vast majority of the English people living in rural communities. They were the only representatives of the universal church, and provided them education which most could not afford otherwise. However, Protestants felt the monasteries were corrupt places and needed to be cleansed away. Simon Fish wrote in 'A supplication of beggars', that: "all the country's economic ills were due to greed, wealth and corruption of churchmen". suggesting that something needed to be done. Each man had to pay annual income to the church; priests charged for weddings and confessions. There were also mortuary fees and charges for the funeral. ...read more.

However, Henry was able to use this perceived corruption as an excuse to reform the Church and appoint himself as 'Supreme Head'. Therefore, money ands ultimate power is a great encouraging factor for the reformation. Henry realised that if he could run the church for the crowns benefit, then it would increase his revenue. However, his need to secure dynasty would have been a strong factor towards his reasons to reform the Church also. Some historians would even argue that Lollards and Lutherans may have influenced the King; however they were a minority, and therefore had no real pressure on Henry to turn him into a Protestant ruler. Finally, it is therefore difficult to define the Reformation to just on key factor. However, I feel that it was Henry's need for divorce that brought all the other factors to a head. It was a catalyst that helped to bring together the factors that led to the break with Rome and the changes within the country. There may have been a Henrician reformation without the Divorce crisis, but it was the Pope's threat to Henry's need for divorce which made the King going against the Pope, and brought about the reformation quicker than it may have been. ...read more.