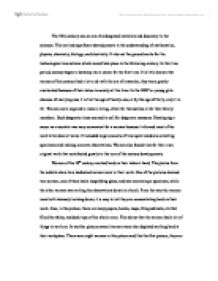 The 19th century was an era of widespread invention and discovery in the sciences. This era had significant developments in the understanding of mathematics, physics, chemistry, biology, and electricity. It also set the ground works for the technological innovations which would take place in the following century. In this time period, science began to develop into a career for the first time. It is little known that women of this century had a lot to do with the era of invention; they were greatly overlooked because of their status in society at this time. In the 1800's a young girls chances of marrying was 1 in 3 at the age of twenty-one, at by the age of thirty, only 1 in 16. Women were required to make a living, either for themselves or for their family members. Such desperate times seemed to call for desperate measures. Developing a career as a scientist was very convenient for a woman because it allowed most of the work to be done at home. It included large amounts of time spent outdoors collecting specimens and making concrete observations. Women also found time for their own original work that contributed greatly to the turn of the century developments. Women of the 19th century worked hard on their tasks at hand. ...read more.

At the Harvard Observatory women were considered helpful, but not necessary expected to do "men's" work. However they were documented to make some discoveries. In the observatory the women did the same work as men for a cheaper rate. This text tells a lot about how women were viewed in society, and more importantly, how they contributed to science. Some of the women from the Harvard Observatory described in this document are "Mrs. Fleming's discovery that variable stars of a certain type may be proved variable by the bright lines in their spectra, and Miss Muary's discovery that Beta Aurigae is a close binary, proved from the study of the spectrum." This document showed women were being recognized by universities, and how the opportunity to do their own original work led to many scientific discoveries. Another text called "Women in Science" written by Mrs. Potter Palmer and published by Art and handicraft in the Woman's Building of the World's Columbian Exposition, Chicago, 1893, described many reasons why women should be allowed to study science for the same wages as men, and attempt their own original work. In this document, women are described by their feminine characteristics as to why they would be good at studying science. For example the document described, "Her proverbial propensity to investigate, her acknowledged patience, her delicacy of manipulation, her exactness of detail, all find legitimate scope in the nice observation and conscientious work of the laboratory." ...read more.

I think this document was very important to the topic because it showed a first hand account of how most women really felt in a laboratory. They worked under a person, and had to do the work, and research they wanted, not original work the women actually wished they could. The women of the century that worked in observatories or laboratories were extremely dedicated to their work. Despite their status in society at the time, they contributed greatly to science by making turn of the century discoveries. Although women were still not given the chances to branch out and study what they wanted as many pictures, papers, and magazines would have liked the public to believe at the time. The most powerful thing that stuck out to me was the first hand account of Mrs. Fleming that showed they were still very limited in studying their own original work because most of their time was consumed by the work their boss had them do. I learned that the women of the 19th century were very passionate about their scientific work, and given more of a chance, I believe they could have offered more to society at the time. Those who opposed women working in science where the traditionalists, who believed that women should stay at home, and bear children. Fortunately, women who worked for their love of science or need of money to support their family, made excellent discoveries that greatly added to society in the 19th century. ...read more.