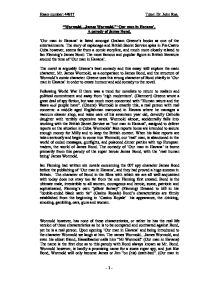 &quot;Wormold&amp;#133;James Wormold.&quot; 'Our man in Havana', A parody of James Bond.

"Wormold...James Wormold." 'Our man in Havana', A parody of James Bond. 'Our man in Havana' is listed amongst Graham Greene's books as one of the entertainments. The story of espionage and British Secret Service spies in Pre-Castro Cuba however, seems far from a comic storyline, and much more closely related to Ian Fleming's James Bond: The most famous and popular figure in British literature around the time of 'Our man in Havana'. The novel is arguably Greene's best comedy and this essay will explore the main character, Mr. James Wormold, as a comparison to James Bond, and the structure of Wormold's comic character. Greene uses this strong character of Bond chiefly in 'Our man in Havana' in order to create humour and add comedy to the novel. Following World War II there was a trend for novelists to return to realism and political commitment and away from 'high modernism'. (Diermert) Greene wrote a great deal of spy fiction, but was much more concerned with "Human nature and the flaws real people have". (Greene) Wormold is exactly this, a real person with real concerns: a middle aged Englishman marooned in Havana where he manages a vacuum cleaner shop, and takes care of his seventeen year old, devoutly Catholic daughter with terribly expensive tastes. Wormold almost, accidentally falls into working with the British Secret Service as "our man in Havana", assigned to deliver reports on the situation in Cuba. Wormolds' fake reports home are intended to secure enough money for Milly and to keep the British content. ...read more.

There was nothing he could do but surrender" (Our man in Havana) The other Lady who steps into Wormold's life is his equivalent 'Bond-girl', Beatrice. Although she does fall quite in love with Wormold it is not due to his good looks, charm or smooth talk. The whole situation is heightened in humour by the role reversing played out within their relationship in comparison to the norm of the Bond novels. In contrast to Wormold she is wittier and handles situations better as demonstrated by the 'Siphoning incident' at the Tropicana, she is also better equipped within the spy field than he, and is educated in the espionage world, however, it is precisely this that causes Beatrice to fall in love with him. She declares "'Oh, how I love you.'.... London is silly to me, and Henry Hawthorne. Do you think for once that I would have left Peter if he had made a fool out of U N E S C O?'" (Our man in Havana) after he admits to her he has been creating false reports. The Bond Girls James encounters each swoon at his heroism, charm and charisma, Beatrice however, admits that when she first met Wormold he "'was just a nice man with a lovely daughter'" (Our man in Havana) and it is not until he reveals to her how completely foolish, un-heroic, and immoral he has been that she falls in love with him. The role reversal is in itself a comic device employed as far back as Aristophane's comedy, "The Poet and the Women", however, Greene attaches another level of humour by adding the Bond dimension. ...read more.

Ant heroes usually accept and often celebrate their positions as social outcasts." (Bennett and Royle) Clearly Wormold fits comfortably into this category. And Bond has been described by a generation as the Hero 007 British spy, however, I believe Greene has allowed us to review this representation by using Bond as a comparison for Wormold, and obliging us to interchange them into each others' roles. Greene makes Wormold a 'real' character with 'real' concerns, such as family, friends, money and health however, his actions within the novel are often brave and heroic. He protects his family by going to the European trade lunch, and he kills Carter to allow Hasselbacher to rest in peace. If we were put into the same situations we would be scared and to overcome that fear is heroic. Bond in contrast is seen much more unfavourably in this light. He is a cold blooded killer, killing for reasons that are questionable especially as we see how vicarious the Secret Service's position is, unknowing as to whether he is killing a Raul or not. Without a family and the amount of money he earns he has little concerns in life and therefore has little courage. Greene has allowed every individual to become a hero through comparing Wormold to Bond. The Use of the comparison with James Bond and the Bond novels in 'Our man in Havana' is a device, which lifts the novel to a new level, not only as an entertainment but also as a political and moral novel. Greene allows us to see much more than would be possible without it and to take away from the book a completely different reading experience. ...read more.