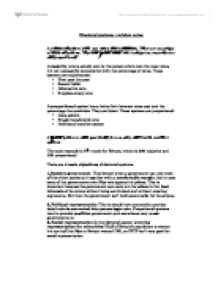 Electoral systems- revision notes An electoral system is the way voters elect candidates. There are many type of electoral systems. They tend to be divided into 2 categories; majoritarian and proportional. A majority vote is simply won by the person who's won the most votes, but not necessarily comparative with the percentage of votes. These systems are majoritarian: * First past the post * Second ballet * Alternative vote * Supplementary vote A proportional system has a better link between votes cast and the percentage the candidate. They are fairer. These systems are proportional: * Lists system * Single transferable vote * Additional member system A hybrid system is made specifically for a country and tries to mix the 2 systems. ...read more.

But then the government isn't held accountable for its actions. 2, Political representation-This is simply how accurately a parties total vote is converted into percentage vote. Proportional systems tend to provide coalition government and sometimes very weak governments to. 3, Social representation-Is the electoral system providing representation for minorities? Half of Britain's population is women but are half the Mps in Britain women? NO, so FPTP isn't very good for social representation 4, Voter choice- How many choices or options does the voter have? Does it get to choose between Mps in the same constituency, do they get a second choice? These questions make up voter choice. ...read more.

Benefit of PR Benefits of Majoritarian * Increases proportional representation so the end outcome is fairer * Minorities will be better represented * Helps minor parties and so they can put more pressure on the government * * Produces strong and decisive governments able to follow polices in accordance to its electorate * The government is scrutinized hugely my media and other rival parties so they gain more power at the next election * Fewer disputes Disadvantages of PR Disadvantages of Majoritarian * Can form weak governments and some times coalitions * A junior partner of a coalition can gain disproportional power * Can breed separatist parties * The better PR systems have poorer voter choice * Doesn't provide proportional representation or much social representation * Most have good voter choice ...read more.