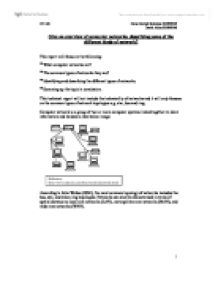 Give an overview of computer networks, describing some of the different kinds of network

Each computer is shown as a sphere, the bus appears as a heavy horizontal line, and connections to the bus appear as vertical lines. The illustration shows a bus network with five computers. Advantages of a Bus Network: � Easy to install - as the cable can be laid along the most effective path � It uses least cable of all topologies, and there is no additional hardware needed � It is in most cases the least expensive solution Disadvantages of a Bus Network: � More expensive cabling - because the line must be shared the cable has to have a high bandwidth. � Not very fast - Addition of nodes negatively affects the performance of the whole network, and if there is a lot of traffic throughput decreases rapidly. Star A star network is a local area network (LAN) in which all computers (workstations or other devices) are directly connected to a common central computer. Every workstation is indirectly connected to every other through the central computer. ...read more.