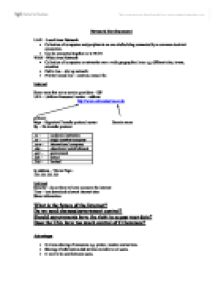 This is a common topology for WAN (Wide area network) in large companies which have a mainframe computer at the Head office and computer facilities at each branch. Advantages of a Star Network * Easy to install and wire. * No disruptions to the network then connecting or removing devices. * Easy to detect faults and to remove parts. * Consistent performance even when the network is being heavily used Disadvantages of a Star Network * Requires more cable length than a linear topology. * If the hub or concentrator fails, nodes attached are disabled. * More expensive than linear bus topologies because of the cost of the concentrators. Diagram of a Star Network Bus Topology Bus Topology is a typical topology for a LAN with all he devices on the network sharing a single cable. Information can by transmitted in either direction from any PC to any other. This system works well if the channels are not too heavily loaded. ...read more.

Moreover, the logic to implement a ring network is relatively simple. Each node in the network is tasked with a straightforward job of accepting the data and sending it to the DTE attached to it, or sending it back out onto the ring to the next intermediate node. However, like all networks, the ring network suffers from some deficiencies. The primary problem is the use of a single channel to tie together all the nodes in the network. If a channel between two nodes fails, then the entire network is lost. To alleviate this problem, some vendors supply ring networks with backup channels and others provide switches that will route data around a failed node. This increases reliability in the event of channel or node failure. More recently, network suppliers have taken to producing ring networks with two rings, so that the network will still be able to function in the event of channel failure. Advantages of ring topology * Growth of system has minimal impact on performance. * All stations have equal access. Disadvantages of ring topology * Most expensive topology. * Failure of one computer may impact others. * Complex. ...read more.