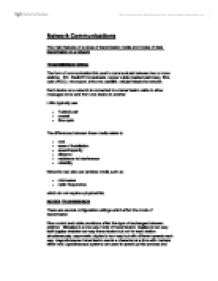 Network Communications The main features of a range of transmission media and modes of data transmission on a network TRANSMISSION MEDIA The form of communication link used to communicate between two or more stations. EG. Radio/TV broadcasts, copper cable (twisted pair/coax), fibre optic (FDDI), microwave, infra-red, satellite, cellular telephone network. Each device on a network is connected to a transmission cable to allow messages to be sent from one device to another. LANs typically use: * Twisted pair * coaxial * fibre optic The differences between these media relate to: * cost * ease of installation * speed/capacity * distance * resistance to interference * reliability Networks can also use wireless media such as: * microwave * radio frequencies which do not require a physical link. MODES TRANSMISSION There are several configuration settings which affect the mode of transmission. Flow control and cable provisions affect the type of exchanges between stations. Simplex is a one-way mode of transmission; duplex is two way; half duplex enables two-way transmission but not for each station simultaneously; asymmetric duplex is two-way but with different speeds each way. Asynchronous transmission sends a character at a time with markers either end; synchronous systems are used to speed up this process and send whole blocks of data at a time by timing the start and end of the block. ...read more.

Token Ring interconnects PCs via special twisted-wire cable in a star topology, connecting all computers to a central wiring hub. CSMA/CD (Carrier Sensing Multiple Access with Collision Detection) A LAN contention protocol by which workstations connected to the same channel are able to sense transmission activity on that channel and so defer their own transmission while the channel is active. If two nodes try to transmit simultaneously a collision is detected and both stations stop transmission for a period. After a random period of time each station will make a repeat attempt. It is unlikely that they will attempt to transmit at the same time and further collision usually does not occur. Wide Area Network (WAN) A WAN connects computer networks or devices that are located in different geographical areas. A WAN uses world-wide communications usually telephone lines, to connect computer resources. A WAN may connect similar computer systems (LANs to LANs) or dissimilar systems (LANs to mini computers or mainframes) A WAN provides communication speeds at usually less than 2Mbps (a common communication line is called T1 that gives 1.544Mbps) Higher speed lines are available for WANs but those are provided by the telephone companies at a very high price. ...read more.

The implication is that packets belonging to other messages may be sent between the packets of the message being sent from A to D. This provides a much fairer sharing of the resources of each of the links. 2. Another benefit of packet switching is known as "pipelining". Pipelining is visible in the figure above. At the time packet 1 is sent from B to C, packet 2 is sent from A to B; packet 1 is sent from C to D while packet 2 is sent from B to C, and packet 3 is sent from A to B, and so forth. This simultaneous use of communications links represents a gain in efficiency, the total delay for transmission across a packet network may be considerably less than for message switching, despite the inclusion of a header in each packet rather than in each message. Meaning of bandwidth and the impact of bandwidth on data transmission Bandwidth has a general meaning of how much information can be carried in a given time period (usually a second) over a wired or wireless communications link. For example, a link with a broad bandwidth - that is, a broadband link - is one that may be able to carry enough information to sustain the succession of images in a video presentation. ...read more.