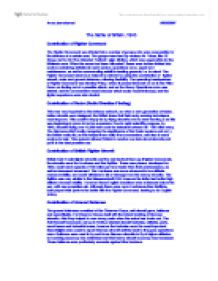 The Battle of Britain, 1940 Contribution of Fighter Command.

The Battle of Britain, 1940 Contribution of Fighter Command The Fighter Command was divided into a number of groups who were responsible for the defence of a certain area. The groups were lead by various Air-Vices, like 12 Group, led by Air Vice-Marshal Trafford Leigh-Mallory, which was responsible for the Midlands area. When the areas had been 'allocated', these were further divided into sectors containing airfields (in each sector), operations room, repair and maintenance, as well as commanding satellite-landing grounds, i.e. to refuel. The Fighter Command acted as a defensive network by using the combination of fighter aircraft, radar and ground defences, allowing flexibility. ...read more.

This couldn't simply be by flying aircrafts over to send warnings as this was beginning to prove to be too expensive. Due to rapid scientific progress, by 1940, aircrafts flying over 10,000 feet could be detected between 50-120 miles away. The Germans didn't really recognise the significance of the Radar system and only the British really did, as this helped them notify the commanders, and also to send sectors to help. This network allowed Britain to receive raw data about aircrafts and put it to the best possible use. Contribution of British Fighter Aircraft Britain had 2 main fighter aircrafts and the rest backed them up (Fighter Command), the aircrafts were the Hurricane and the Spitfire. ...read more.

Although there were more Hurricanes than Spitfires, both played their parts in the battle with the Fighter Command, leading to an English victory. Contribution of Ground Defences The ground defences consisted of the Observer Corps, anti aircraft guns, balloons and searchlights. He Observer Corps dealt with the inland tracking of German aircrafts. Also they helped to man many posts when the actual war broke out, The Anti-Aircraft Command, set up in 1939 protected aircraft factories, airfields, ports, naval bases and industrial areas, however the factories were the most important. Searchlights were used to report German aircraft activity back to the guns operations room. Balloons were used to try and force German aircrafts to fly at higher altitudes so bombing accuracy was minimised and that heavy aircraft accuracy was increased. These balloons were particularly accurate against dive bombers. Aman Janmohamed 02/05/2007 ...read more.