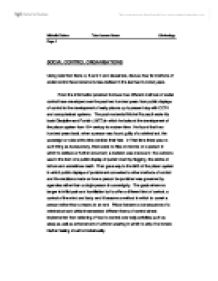 Using data from items A, B and C and elsewhere, discuss how far methods of social control have become bureaucratised in the last two hundred years.

Michelle Deluce Tutor Joanne Green Criminology Page 1 SOCIAL CONTROL ORGANISATIONS Using data from items A, B and C and elsewhere, discuss how far methods of social control have become bureaucratised in the last two hundred years. From the information provided it shows how different methods of social control have developed over the past two hundred years from public displays of control to the development of early prisons up to present day with CCTV and computerised systems. The post modernist Michel Foucault wrote his book Discipline and Punish (1977) in which he looks at the development of the prison system from 18th century to modern time. He found that two hundred years back, when a person was found guilty of a criminal act, the sovereign or ruler at the time decided their fate. In That time there was no such thing as bureaucracy, there were no files or records on a person in which to retrieve or further document, a decision was made and the outcome was in the form of a public display of punishment by flogging, the stocks or torture and sometimes death. ...read more.

This prison was a basis for the design of other more modern prisons such as Pentonville. The present day has newer more complex methods of control in place and simpler methods have given way to bureaucratisation, our very lives are documented, filed, and can be raised at any time by institutions that may request it to be. Everything we do can be computerised in the form of taxes, credit card transactions, driving licences and employment records as well as many others; we are all socially controlled in one way or another. There is the implement of CCTV's in high streets, office buildings council housing estates and other public places in which we can be watched and viewed at most times in the day or night. We are all entangled in red tape and bureaucracy at sometime in our lives whether we are aware or not and for the justice system there isn't any let off in that there seems to be a system in place for everything, from beginning to end there is a system. ...read more.

only criminals and those doing something they shouldn't be would take the view that CCTV is not in our best interest. Though it does seem to be the natural order of things and as time moves on it becomes almost invisible and unthought-of as we go about our lives often oblivious of being watched from afar. Perhaps its control gone mad or is it for our own safety that such mechanisms are in place, but are they really for our benefit? In the future where will surveillance be? Will our DNA be recorded from birth? All questions to consider. Looking at how far we have come in two hundred years it is easy to wonder what next? And are we really a free society as we are often told by those whom are in power, who make the decisions for us but lead us to believe we are making them for ourselves. It is an endless debate were not everyone will agree on which as always been the case or bureaucracy may never have been born had we all shared the same opinion. Bureaucracy is a safety net for those within institutions enabling them backup when required covering their own backs in any situation. ...read more.