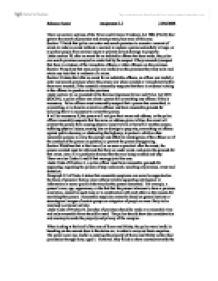 There are several sections of the Police and Criminal Evidence Act 1984 (PACE) that govern the search of premises and arrest powers; key areas of this case. Section 17 holds that police can enter and search premises to execute a warrant of arrest; to make an arrest without a warrant; to capture a person unlawfully at large; or to protect people from serious injury or prevent serious damage to property. Under section 18, after an arrest for an indictable offence has been made, the police can search premises occupied or controlled by the suspect if they reasonably suspect that there is evidence of the immediate offence or other offences on the premises. Section 19 explains that once police are lawfully on the premises they may seize and retain any item that is evidence of a crime. Section 32 states that after an arrest for an indictable offence, an officer can lawfully enter and search premises where the person was when arrested or immediately before they were arrested, if the constable reasonably suspects that there is evidence relating to the offence in question on the premises. ...read more.

Reasonable suspicion cannot be based on generalisations or stereotypical images of certain groups or categories of people as more likely to be involved in criminal activity. Under Code of Practice B, searches of premises should be made at a reasonable time and only reasonable force should be used. The police should show due consideration and courtesy towards the property and privacy of the occupier. When looking at the brief of the case of Karen and Micky, the police were lawful in knocking on the nearest door to the stolen car, in order to carry out basic enquiries. The police were also lawful in entering the property of Karen and Micky as they had permission through Katy, aged 5. However, they failed to show courtesy towards the privacy of the occupier by not asking the 5 year-old, Katy, to see an adult, and, consequently, may be in breach of Code B. The brief of the case gives suspicion as to the grounds on which the search of the premises was conducted. There is a direct breach of Code A, as it appears that the search was carried out because of Karen's relation to Micky, a man with previous convictions for theft. ...read more.

Whilst considering the grounds for Micky's arrest it becomes apparent that unnecessary force, in the nature of batons, was used in order to detain him. As he was verbally abusive towards the officers, they had the right to arrest him, under section 24 of PACE, as amended by SOCPA, believing it was necessary in order to prevent him causing others physical injury. However, because of the position Micky was in, finding his family being detained, verbal abuse can be understood and may not form reasonable grounds for his arrest. It is not made clear within the brief whether Karen or Micky was informed, under section 28 of PACE, that they were under arrest or of the grounds for their arrest, and so the police may be in breach of this section on both accounts. Looking at the whole of this case, it is clear that the police were unlawful. The only part of the case that was conducted in an appropriate manner was that of knocking on the nearest door to the stolen car, in order to carry out enquiries. Throughout the rest of the case the police demonstrate significant bias towards Micky and his family because of his previous convictions of theft. Rebecca Turner Assignment 1.1 21/05/2009 ...read more.