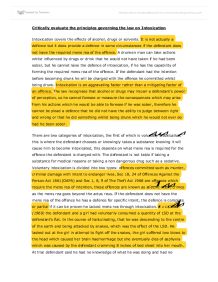 Critically evaluate the principles governing the law on Intoxication.

Critically evaluate the principles governing the law on Intoxication Intoxication covers the effects of alcohol, drugs or solvents. It is not actually a defence but it does provide a defence in some circumstances if the defendant does not have the required mens rea of the offence. A drunken man can take actions whilst influenced by drugs or drink that he would not have taken if he had been sober, but he cannot raise the defence of intoxication, if he has the capability of forming the required mens rea of the offence. If the defendant had the intention before becoming drunk he will be charged with the offence he committed whilst being drunk. Intoxication is an aggravating factor rather than a mitigating factor of an offence. The law recognises that alcohol or drugs may impair a defendant's power of perception, so he cannot foresee or measure the consequences which may arise from his actions which he would be able to foresee if he was sober, therefore he cannot be plead a defence that he did not have the ability to judge between right and wrong or that he did something whilst being drunk which he would not ever do had he been sober. ...read more.

The opposite occurred in the case of R v Hardie (1985), the drug involved in this case is valium that has a sedative effect. The defendant lived with his girlfriend who had insisted he leave after breakdown of their relationship. He became very upset and took several tablets of valium that were legally prescribed for his girlfriend to calm himself down. Whilst he was under the influence of the drug he had started a fire in the bedroom of the flat. He was charged with causing criminal damage being reckless as to whether life would be endangered. His conviction was quashed when defendant appealed that he did not expect the tranquillisers to have that effect on him. In this case the jury should have considered whether or not the defendant had been reckless in taking valium, in sense that he had been aware of the risks from taking valium. But the defendant could not have known that him consuming the valium would cause him to commit aggravated criminal damage. The second category of intoxication is involuntary intoxication, this covers situations where the defendant did not know they were consuming an intoxicating substance e.g. where a drink has been 'laced' with alcohol. ...read more.

This would show evidence for basic intent crimes. But this is illogical as it means that drunkenness can negative a specific intent crime but not a basic intent crime. The Law Commission is critical of the outcome decided by the House of Lords in DPP v Majewski (1977), as they stated the examination of intoxicated defendant's who deserve being blamed and punishment should be the issue of if they had the required mens rea or not. But in cases the law ensures that the juries do not take into account the defendant's voluntary intoxication when they consider the fault of basic intent crimes. This makes it very difficult and nearly impossible for juries to assess whether or not the defendant had the required mens rea as they are directed to ignore evidence related to his drunken state. The Law Commission made a valuable recommendation of abolishing the Majewski rules and replaces it with a new special offence of causing harm whilst being deliberately intoxicated. This could be used as a charge alone or as an alternative to an existing offence, but it cannot be used in cases of involuntary intoxication. It is not easy to abolish the Majewski rules as in some cases it does function well and bring justice. The rules should be codified to avoid problems though. ...read more.