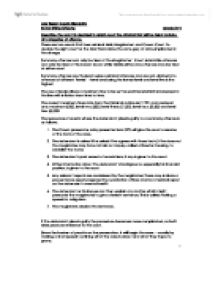 Describe, the way it is decided in which court the criminal trial will be held. Include all categories of offence.

Describe, the way it is decided in which court the criminal trial will be held. Include all categories of offence. There are two courts that hear criminal trials; Magistrates' and Crown Court. To decide the right court for the trial, this involves the category of crime implicated in the charge. Summary offences can only be tried at the Magistrates' Court; indictable offences can only be tried at the Crown Court, while triable either way offences may be tried at either court. Summary offences are the least serious criminal offences and are sub-divided into offences of different 'levels' - level one being the lowest level and level five is the highest. The use of levels allows a maximum fine to be set for each level which is increased in the line with inflation from time to time. The current maximum fines date from the Criminal Justice Act 1991 and are level one: maximum �200, level two: �500, level three: �1,000, level four: �2,500 and level five: �5,000. ...read more.

7. The magistrates decide the sentence. If the defendant pleads guilty the procedure becomes more complicated, as both sides produce evidence to the court. Since the burden of proof is on the prosecution, it will begin the case - usually by making a short speech outlining what the case is about and what they hope to prove. Prosecution witness will then be called one at a time to give evidence, and prosecutor will question each to establish what he or she saw and heard which is called the examination of the chief. The defence will then cross-examine that witness to test their evidence and try to show that it is not reliable. At the end of the prosecution case the defence can submit to the magistrates that there is no answer and that the case should be dismissed at this point, because the prosecution has to prove the case and if its evidence does not establish a case, then it must be dismissed. ...read more.