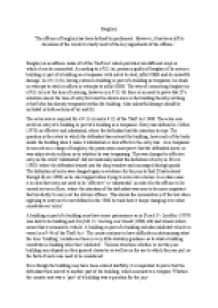 The offence of burglary has been defined by parliament. However, it has been left to decisions of the courts to clarify most of the key ingredients of the offence.

﻿Burglary ?The offence of burglary has been defined by parliament. However, it has been left to decisions of the courts to clarify most of the key ingredients of the offence.? Burglary is an offence under s9 of the Theft Act which provides two different ways in which it can be committed. According to s.9(1) (a), person is guilty of burglary if he enters a building or part of a building as a trespasser with intent to steal, inflict GBH and do unlawful damage. In s.9 (1) (b), having entered a building or part of a building as trespasser, he steals or attempts to steal or inflicts or attempts to inflict GBH. The way of committing burglary as s.9(1) (a) is at the time of entering, however in s.9 (1) (b) there is no need to prove that D?s intention was at the time of entry but must be shown once in the building thereby catching a thief who has already trespassed within the building. ...read more.

as he was trapped when trying to enter into a house. In certain cases it is clear that entry not need to be ?effective? or ?substantial? in order for the offence to be carried out as in Ryan, where the intention of the defendant was seen to be more important that his ability to carry out the ulterior offence. This shows the inconsistency of the law when applying to entry as it is not defined in the 1968 Act and how it keeps changing over what constitutes as ?entry?. A building or part of a building must have some permanence as in B and S v Leathley (1979) was held to be building and Norfolk C v Seeking and Gould (1986) still had wheels which meant that it remained a vehicle. A building or part of a building includes inhibited vehicle or vessel in s.9 (4) of the Theft Act. The courts continue to have difficulty in determining what the term ?building? includes as there is very little statutory guidance as to what a building constitutes a building other that ?inhibited?. ...read more.

Smith and his friend Jones went to Smith?s father?s house and took two t.v sets without the father?s knowledge or permission. Smith was therefore guilty of burglary as at the moment he entered he intended to steal. Therefore a shoplifter entering a shop would be guilty of burglary if D entered intending to steal goods. Burglary was to protect buildings from trespasser from stealing or intending to steal. The extension of the law on burglary to include people, who have permission even though they have gone beyond that permission, is unnecessary. A thief as in Smith and Jones can still be charged with theft. For mens rea they must know or be subjectively reckless as to whether he is a trespasser, plus either intention at points of entry to commit theft, GBH or criminal damage in s.9(1)(a). mens rea for theft or GBH at the point of committing or attempting to commit these offences in a building in s.9(1)(b). Conditional intent is where D is entering intending to steal anything he can find which is worth taking. This is sufficient for D to be guilty under s. ...read more.