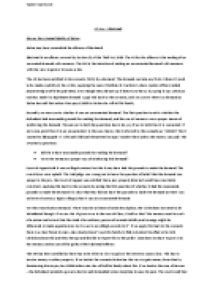 Blackmail is an offence covered by Section 21 of the Theft Act 1968.

﻿Tajinder Singh Ranshi A2 Law ? Blackmail Discuss the criminal liability of Debra Debra may have committed the offence of blackmail. Blackmail is an offence covered by Section 21 of the Theft Act 1968. The AR for the offence is the making of an unwanted demand with menaces. The MR is the intention of making an unwarranted demand with menaces with the view to gain or to cause a loss. The AR has been satisfied in the scenario, firstly by a demand. The demand can take any form. It doesn?t need to be made explicitly to the victim. Applying the case of Collister & Warhurst where 2 police officers talked about letting D off if he paid them, even though they did not say it directly to the D, by saying it was within an earshot, made it a legitimate demand. ...read more.

Alan does not have to give in to the menace; Debra can still be guilty of the blackmail offence. The MR has been satisfied as there has to be either a view to gain or the intent to cause a loss. This has to involve money or other property. If we look at the scenario Debra has the view to gain money from Alan by threatening him to pay her £1000 otherwise she will tell his family about this. If we look at the case of Bevans – the defendant pointed a gun at a doctor and demanded some morphine to ease his pain. The courts said that the injection is property and it was held that the defendant made a gain and the doctor made a loss. If convicted of the offence of blackmail Debra may face under s.21 (3) of the Theft Act 1968, the maximum custodial sentence of 14 years. ...read more.