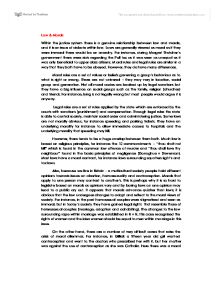 Law and Morality. Within the justice system there is a genuine relationship between law and morals, and it is an issue of debate within law. Laws are generally viewed as moral as if they were immoral there would be an anarchy.

Law & Morals Within the justice system there is a genuine relationship between law and morals, and it is an issue of debate within law. Laws are generally viewed as moral as if they were immoral there would be an anarchy. For instance, during Margret Thatcher's government there were riots regarding the Poll tax as it was seen as unequal as it was only beneficial to upper class citizens. Moral rules and legal rules are similar in a way that they both have to be obeyed. However, they do have many differences. Moral rules are a set of values or beliefs governing a group's behaviour as to what is right or wrong. These are not universal - they may vary in location, social group and generation. Not all moral codes are backed up by legal sanctions but they have a big influence on social groups such as the family, religion (churches) and friends. For instance, lying is not legally wrong but most people would argue it is anyway. Legal rules are a set of rules applied by the state which are enforced by the courts with sanctions (punishment) ...read more.

For instance, in Gillick a fifteen year old girl wanted contraception and went to the doctors who prescribed her with it, but her mother was against the use of contraception as she was Catholic. Here there was a moral dilemma as it was held by giving contraceptive pills to under 16s would encourage them to have underage sex but, by not giving it to them it would cause many unwanted teen pregnancies. Additionally, there has been a recent case on designer babies and whether or not it is a good idea or not. Another example is where individuals choose to abort a baby without any justification - the question to be asked here is where do you draw the line? In this case, many philosophers have written about their views surrounding the relationship between law and morals. John Stewart Mill was a writer in the 19th century who took a liberal view in his book 'On Liberty'. Stewart Mill proposed that you should not interfere with ones private life if does not bring 'harm to others'. ...read more.

He argued that knowledge of harm is insufficient and the state may interfere to stop a person from harming themselves seriously. He criticised Devlin and said people should be free to learn and experiment and that society has the capacity to hold many differing moral values without falling apart. Furthermore, Dworking suggested that moral values should not be based on prejudice e.g. 'homosexuality is evil', emotional factors or facts that have no evidence - e.g. 'homosexuality spreads aids'. Also, Hughes said that Devlin's proposals reminded him of Nazi laws allowing judges to punish innocent people, illustrating this could be R v Gibson where an artist had exhibited dried foetus earrings, which was held to outrage public decency. The Hart-Devlin debate are both influential on practice but are not as opposed as they seem. In a recent committee today called the Warnock Committee who looks at scientific issues such as pregnancy fertilization and embryo research. These issues are seen as unmoral even though they have such beneficial results such as people who can't have baby's being able to through donated sperms and eggs. This shows that the law is not always able to meet the needs of scientific knowledge and instead developments as such have caused a moral dilemma. ...read more.