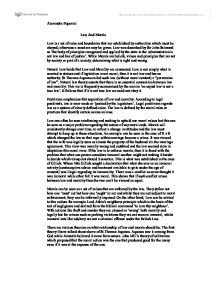 Law And Morals Law is a set of rules and boundaries that are established by authorities which must be obeyed; otherwise a sanction may be given. Law was described by Sir John Salmond as 'the body of principles recognised and applied by the state in the administration is not law and has of justice'. While Morals are beliefs, values and principles that are set by society or part of a society, determining what is right and wrong. Natural Law holds that Law and Morality are connected. Law is not simply what is enacted in statues and if legislation is not moral, then it is not law and has no authority. St Thomas Aquinas called such law (without moral content) a "perversion of law". Natural law theory asserts that there is an essential connection between law and morality. This vie is frequently summarised by the maxim 'an unjust law is not a true law'. It follows that if it is not true law we need not obey it. ...read more.

This is what was established in the case of Gillick. Where Mrs Gillick sought a declaration that what she saw as an immoral activity (contraceptive advice and treatment available to girls under the age of consent) was illegal regarding its immorality. There was a conflict as some thought it was immoral while other felt it was moral. This shows that if such conflict arises between law and morality then the two can't be viewed as equal. Morals can be seen as a set of values that are enforced by the law. They define not how one 'must' act but how one 'ought' to act and whilst they are not subject to moral enforcement, they can be informally imposed. On the other hand, Law can be related to this culture for example Lord Atkin's neighbour principle which is the basis of the tort of negligence and derived from the biblical command 'to love thy neighbour'. With actions like theft and murder they are classed as 'wrong' both morally and legally but for crimes such as parking ...read more.

Devlin, however was strongly opposed to the report on what might be as a natural law approach. He felt that society had a certain moral standard which the law had a duty to support. The Report supported Hart's view that law and morality should be separate but various cases decided since the report show that many judges are imposing their moral views in their judgements such as in the case of R v Brown ( defendant's willingly consented to sado-masochistic practises). Even though none of them complained to the police they were prosecuted and convictions were upheld based on public policy to defend the morality of the society. As illustrated the law is seen to attempt to uphold what it considers to be public morality even if some may dispute the correctness of that moral code. In conclusion there is a close relationship between law and morals as the law upholds moral values in some cases but the extent to which law should be influenced by morality remains topical. ?? ?? ?? ?? Alexandra Popovici ...read more.