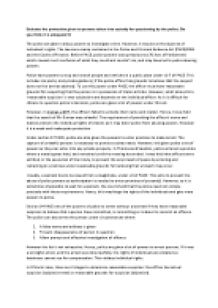 ﻿Evaluate the protection given to persons taken into custody for questioning by the police. Do you think it is adequate?zl The police are given various powers to investigate crime. However, it may be at the expense of individual?s rights. The laws are mainly contained in the Police and Criminal Evidence Act (PACE)1984 and the Codes of Practice. Before PACE, police powers was spread across 70 Acts of Parliaments which caused much confusion of what they could and couldn?t do, and may have led to police abusing powers. Police have powers to stop and search people and vehicles in a public place under s1-7 of PACE. This includes car parks, and private gardens,( if the police officer has grounds to believe that the suspect does not live at that address). ...read more.

Hence, it was held that the search of Mr Osman was unlawful. The requirement of providing the officer?s name and station protects the individual rights of citizens as it may deter police from abusing powers. However it is a weak and inadequate protection. Under section 17 PACE, police are also given the powers to enter premises to make arrest. The capture of unlawful persons is necessary to protect society needs. However, this gives police a lot of powers as they can enter into any private property. In Thomas and Sawkins, police entered a premise where a meeting was held, and remained until the meeting has ended. It was held that officers were entitled, in the execution of their duty, to prevent the any breach of peace by entering and remaining on premises under reasonable grounds for believing that a breach may occur. ...read more.

Section 24 PACE sets of the powers of police to arrest without a warrant if they have reasonable suspicion to believe that a person have committed, is committing or is about to commit an offence. The police can also arrest the person under circumstances where: 1. A false name and address is given 2. Prevent disappearance of person in question 3. Allow prompt and effective investigation of offence However the list is not exhaustive. Hence, police are given a lot of powers to arrest persons. If it was a wrongful arrest, and the arrest was done lawfully, the rights of individuals are violated as detainees cannot sue for compensation. This violates individual rights. In O?Hara?s case, there are 2 stages to determine reasonable suspicion: the officer has actual suspicion (subjective test) or reasonable grounds for suspicion (objective). ...read more.