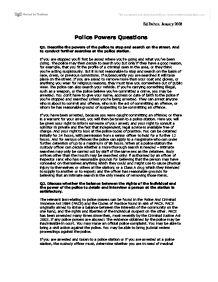 Police Powers Questions Q1. Describe the powers of the police to stop and search on the street. And to conduct further searches at the police station. If you are stopped you'll first be asked where you're going and what you've been doing. The police may then decide to search you but only if they have a good reason, for example, that you fit the profile of a criminal seen in the area, or they think you're acting suspiciously. But it is not reasonable to stop and search on the basis of race, dress, or previous convictions. If subsequently you are searched it will take place on the street. If you are asked to remove more than your coat and gloves, or anything you wear for religious reasons, they must take you somewhere out of public view. The police can also search your vehicle. If you're carrying something illegal, such as a weapon, or the police believe you've committed a crime, you may be arrested. ...read more.

When at a police station the custody officer can decide whether a more thorough search is needed - intimate searches may only be carried out by staff of the same s*x as the detainee. Body orifices other than the mouth may be searched only: if authorised by an officer of inspector rank who has reasonable grounds for believing that the person may have concealed on themselves anything which they could and might use to cause physical injury to themselves or others at the station; or a Class A drug which they intended to supply to another or to export; and the officer has reasonable grounds for believing that an intimate search is the only means of removing those items. Q2. Discuss whether the balance between the rights of the individual and the power of the police to detain and interview a person at the station is satisfactory. The relevant law relating to police powers can be found in the Police And Criminal Evidence Act 1984 (PACE) ...read more.

During your questioning and treatment by the police in custody, the police are prohibited from torture, inhuman or degrading treatment, you also have the right to a fair trial and the right to privacy. Powers of entry and search must be fully justified before use and the police should always consider whether their objectives could be met by other less obtrusive means. If the police exceed their powers any evidence obtained as a result may not be able to be used as evidence in a trial. The police also must observe a Code of Practice on stop and search, although if they fail to observe it, the remedy is usually to make a police complaint - done at the police station that it occurred at. Or if prosecuted to raise an objection in court - rather than to take legal proceedings against the police; but this can also be done, and you can sue the police as you could any other citizen. Ed Dalton. January 2008 ...read more.