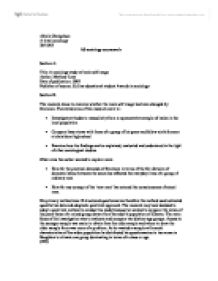 A sociology study of male self image

Title: A sociology study of male self image

The research chose to examine whether the male self image has been changed by feminism. The stated aims of this research were to:

Other aims the author wanted to explore were:

It is likely that laza decided to use structured questionnaires to compare the views of his peers with those of older males. He chose to only question males self images. By using questionnaires laza could gain an appropriate number for this type of research. Laza was a sociology student carrying out a pilot investigation therefore there were practical issues to consider such as time, resources and administration.

To deal with issues with such as a low response rate is always a common problem with postal questionnaires. Laza distributed 25 questionnaires in Boughton and 25 Boughton heath then used the first 10 successfully recovered in each location.

Evidently theoretically the males in lazas research had been affected by feminism, and lazas choice of methodology allowed him to verify his hypothesis. Self completion questionnaires allowed laza to draw interesting conclusions from the respondents answers. It allowed allowed him look at the effect of  feminism on the mens behaviour. However the length of questionnaire ran to three pages which treated two problems. Firstly it may have deterred respondents as it would be time consuming. Secondly for laza to analyse the answers it would be time consuming. Respondents may not have understood the questions, therefore their answers may have been incomplete, illegible, or in comprehensible. Closed questions may also have limited their responses, therefore this may have effected the validity of lazas research. However by using a quantitative method he increased the reliability of his findings.

Laza tried to ensure that his sample was representative with regards to social class by distributing his questionnaires in two areas one predominantly working class and the other middle class. This sample was also representative in terms of age two distinct groups were represented.