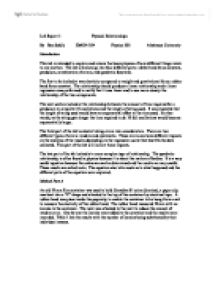 Explore and review the basic physics of how different things relate to one another.

This lab is intended to explore and review the basic physics of how different things relate to one another.  The lab is broken up into four different parts: rubber band force constant, pendulum, combination of errors, and quadratic functions.

The first to be looked at was elasticity compared to weight and gravitational force: rubber band force constant.  The relationship should produce a linear relationship and a linear regression was performed to verify that it was linear and to see more closely the relationship of the two components.

The next section looked at the relationship between the amount of time required for a pendulum to complete 10 oscillations and the length of string used.  It was expected that the length of string used would have an exponential effect to the time used.  In other words, as the string gets longer the time required to do 10 full oscillations would become exponentially larger.

The third part of the lab looked at taking errors into consideration.  There are two different types of errors: random and systematic.  These errors can have different impacts on the analysis of the results depending on the regression curve that best fits the data collected.

In Table 1, the mass is the mass added not including the container and rubber band.  The total mass is the total mass of the loonies in the container.  The results regarding length was the raw reading from the ruler and the extension is just the subtraction of the ruler reading from the starting length.  The total weight was the total mass multiplied by 9.81 m/s2.  The results were graphed using Graphical Analysis and a linear regression was performed to see the relationship between the extension and the force applied.  Figure 1 is the graph that was produced with the linear regression line.  The line was the best fit for this particular model. 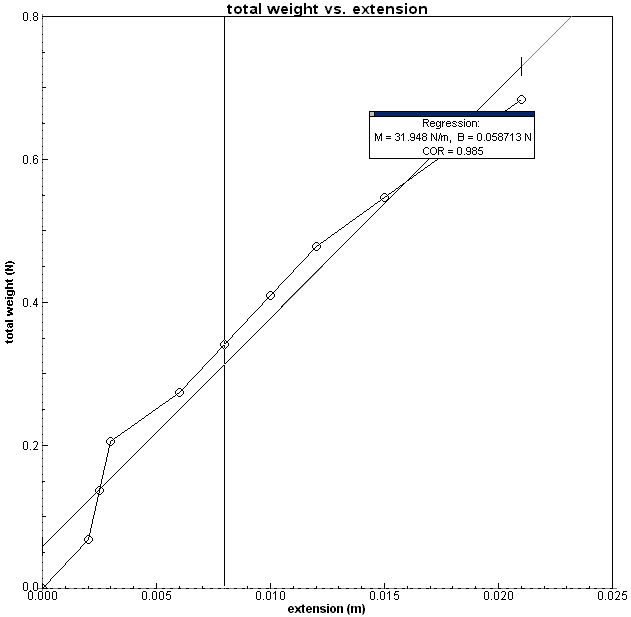 The total weight is the applied force so the graph is a representation of Hooke’s Law. F=-kx.  With this being the case then k (proportionality constant) is 31.95 N/m, which is the slope of the regression line.

The Graphical Analysis fit could have been better.  Since Hooke’s law is a linear law a linear regression was performed.  Not all of the dots aligned as good as was hoped.  The errors were probably due to random errors in measurement.

when y = 0.  To figure this out the quadratic function can be rewritten as: x = -b/2a ± √b2 – 4ac   / 2a.  The graph is helpful to quickly see where the roots are.  The Graphical Analysis software allowed me to zoom into the roots closer than what figure 3 allows to be seen.  Visually the roots looked to be –0.32 and 6.44 but with a calculator the equation was a little more accurate for the first root at –0.317.  Using the proper number of significant figures then the answers would be the same whether calculated or visually enhanced.

Looking at the equation more closely shows an interesting equation within the bigger one.  Before the “±” symbol is –b / 2a, which is the same for both roots.  This is important because the quadratic equation is symmetrical and the –b / 2a equation points to the apex of the curve, like a mid-point.  Another note on this point is that the point is also where the slope = 0, which is when the ball would begin falling back to the earth.

This lab looked at some of the different physical relationships that are current theories or laws.  The experiments verified these relationships.