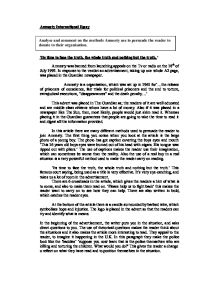 Analyse and comment on the methods Amnesty use to persuade the reader to donate to their organisation.

Amnesty International Essay 'Its time to face the truth, the whole truth and nothing but the truth.' Amnesty was banned from launching appeals on the Tv or radio on the 18th of July 1995. In response to the verdict an advertisement, taking up one whole A2 page, was placed in the Guardian newspaper. Amnesty is a organisation, which was set up in 1961 for'...the release of prisoners of conscience, fair trials for political prisoners and the end to torture, extrajudical executions, "disappearances" and the death penalty...' This advert was placed in The Guardian as; the readers of it are well educated and are middle class citizens whom have a lot of money. Also if it was placed in a newspaper like The Sun, then, most likely, people would just skim read it. Whereas placing it in the Guardian guarantees that people are going to take the time to read it and digest all the information provided. In this article there are many different methods used to persuade the reader to join Amnesty. ...read more.

They appeal to the reader, to imagine it happening in the U.K. In this paragraph they make the police look like the 'baddies' 'suppose you now learn that is the police themselves who are killing and torturing the children. What would you do?' This gives the reader a change o reflect on what they have read and to position themselves in the situation. When you first think to yourselves, the police killing people.... It just doesn't add up but then when you read that there were witnesses who saw the police killing these people it changes your view on the law 'the bodies of children were found in a park in the capital city of a certain country. They had been horribly tortured before they died. Witnesses claimed that people who did it were police officers.' The second paragraph is written in a less formal way 'okay, your no firebrand...' by using humour makes the reader feel like the advertisement is about a very serious matter, but it also has a humorous side to it. ...read more.

These sentences make you feel very upset and very guilty. The last few sentences of the article tells you how your can personally make a difference to what is happening 'joining Amnesty is the most effective way you can help them. Please do it today.' The application form then follows this sentence so people can donate to Amnesty. They try and make you feel as if, if you do not donate then these killings would carry on. In my personal opinion I think that this advert was very successful in persuading people to join Amnesty. I think they should not have been banned from making advertisements, as they are a very important organisation which save many innocent lives every day. The advertisement uses many different types of vocabulary, which can be understood by people aged fourteen and up. The only thing, which I think could have been improved in the advert, is the way in which they talk about politics. I think they talk about it too much, people who are reading the advertisement don't want to know about politics, and they just want to know about the torture and how Amnesty helps them. ...read more.