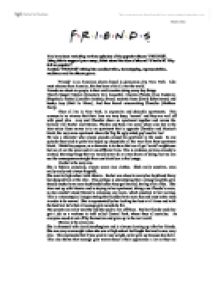 You have been watching various episodes of the popular sitcom 'FRIENDS'. Using this to support your essay, think about the idea of sitcom? What is it? Why is it so popular? Analyse 'FRIENDS' taking into consideration, stereotyping, representation, audience and the sitcom genre. 'Friends' is an American sitcom based in glamorous city, New York. Like most sitcoms from America, this has been a hit all over the world. Friends are about six people in their mid-twenties doing every day things. There's fusspot Monica (Courtney Cox Arquette), Clueless Phoebe (Lisa Kudrow), Shopaholic Rachel (Jennifer Aniston), Sweet, neurotic Ross (David Schwimmer) and hunky Joey (Matt Le Blanc). And then there's wisecracking Chandler (Matthew Perry). They all live in New York, in expensive and desirable apartments. This conveys to as viewers that their lives are very busy, 'normal' and they are well off with good jobs. Joey and Chandler share an apartment together and across the hallway live Rachel and Monica. Phoebe and Ross live some where else but in the later series Ross moves in to an apartment that is opposite Chandler and Monica's block, the very same apartment where the 'big fat ugly naked guy' used to live! He was a character who always parades around his apartment in the nude. In one episode they tried to poke him taped up chopsticks all the way from they apartment block. I think his purpose, as a character is to show that we all get 'weird' neighbours but we all are the same and all run different lives. ...read more.

Chandler is the funny one. He's the one that cracks jokes to people and makes fun of them. He is best friends with Joey and shares an apartment with him. But the friendship was hanging by a thread at one point when chandler slept with one of Joey's girlfriend. But made up later as true friends do - as the sitcom shows the ups and downs of friendship. Joey and him love watching Baywatch and have even set his alarm on his microwave to the time it starts so they won't miss it. This is stereotypical as they are saying two single men in their earlier twenties, with their testosterone running high, would to all this trouble just to gulp at a slim female body running on a beach. He is well educated and has a stable job. But they stereotype him by him having another side of him. He is also very sarcastic, which shows he is a insecure person inside and has to make fun of others for him to feel good. He comes from a broken family where his father left him when he was young and his mum smokes a lot and he was mainly neglected during his childhood. This shows that every one comes from different backgrounds and that we should respect that. He is represented by having a lot gestures with the hands and the jokes he cracks to his friends. ...read more.

It was a mid shot so we could see Rachel's facial expressions and the gestures she conducts to occupy her line. Which helps us understand the true meaning. In sitcoms, I found out that they mostly use a mid shot to film the scenes. Because this angle shows everything, the actors and the background, without losing any detail of the other when using another angle. While watching that episode, I noticed that they only use a long shot when someone is entering or leaving the room. Like when Ross entered the room to meet Rachel, the Camera switched to a long shot, to see both their whole body, walking together towards the middle and kiss. This method is to show maybe what they are wearing on that episode to give the wardrobe manger some credit! They also use a lot of establishing shots to set the scene that is to follow. They have establishing shots of the apartment block they live in and the city life. American sitcoms tend to have more sexual diminuendos than British ones. I think this makes it a lot more funnier and in whole a better sitcom. I think Friends is so successful because it deals with universal themes - Falling in love, falling out of love, getting a job, losing a job...Stuff that everybody can relate to. Fact - During the last season, Friends became the most watched sitcom in the world, viewed by more than 30 million people in the US and Britain alone. ...read more.