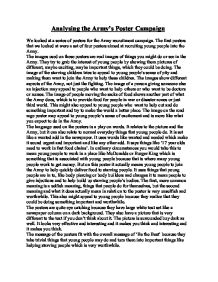 Analysing the Army's Poster Campaign We looked at a series of posters for the Army recruitment campaign. The first posters that we looked at were a set of four posters aimed at recruiting young people into the Army.

Analysing the Army's Poster Campaign We looked at a series of posters for the Army recruitment campaign. The first posters that we looked at were a set of four posters aimed at recruiting young people into the Army. The images used on these posters are real images of things you might do or see in the Army. They try to grab the interest of young people by showing them pictures of different, maybe exciting, maybe important things, which they could be doing. The image of the starving children tries to appeal to young people's sense of pity and making them want to join the Army to help these children. The images show different aspects of the Army, not just the fighting. The image of a person giving someone else an injection may appeal to people who want to help others or who want to be doctors or nurses. The image of people moving the sacks of food shows another part of what the Army does, which is to provide food for people in war or disaster zones or just third world. This might also appeal to young people who want to help out and do something important and try to make the world a better place. The image on the road rage poster may appeal to young people's sense of excitement and is more like what you expect to do in the Army. ...read more.

The large writing is like a challenge. It is very defensive. The main text is also very aggressive and passionate. He explains that black people in the Army are no longer treated badly in any way and he addresses some racial insults that other black people might call him for being in the Army. He explains how they are not justified and he sounds very proud. He tries to allay any fears other black people might have of joining the Army. Also there is a phone number in the copy, which asks people to call and talk to real black soldiers to prove that this poster is true and give it credibility. The poster is addressed to other Afro-Caribbean people who would be the ones insulting the man on the poster. He is defending the Army and also trying to convince them to join as well because the Army has changed and it is a good career and there is no more racism. The effect the poster will have on black people is probably it will make them think about joining the Army if they have never thought about it before and especially if they have. It may reassure them that it is a good thing to do. I don't think the poster will have much effect on other people except other people from other ethnic minorities who might think that if this is true for black people then it might be true for me. ...read more.

I think the poster is effective because it catches people's attention and makes women think about joining the Army as a challenge. We had to create these posters in groups with a main idea behind our groups campaign. First we thought about what women wanted and what they are concerned about. We decided that women want: to help people, challenges, opportunities, equality, excitement, good pay, a career, not to be underestimated. We decided that our main focus for our campaign would be equality and opportunities. One of the posters in our group is about fair pay, one is about women being just as good or better drivers than men, one is about the lack of women in the Army and one is about the challenges the Army offers. We think that all these issues are important to women and will attract them to the Army. We think we will attract women that are truly interested in joining the Army and will not waste the Army's time because our posters appeal to women who want excitement and challenges and equality. When we presented out posters to the audience I think that they liked our posters. They also gave us advice. Some of the text on some of our posters was too long and not snappy and sharp enough so I changed mine and so did a couple of the other members of my group. I think this has improved my poster because now it is simpler and clearer and more professional. ...read more.