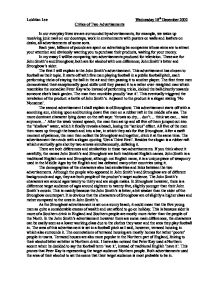 LokMan Lee Wednesday 18th December 2002 Critics of Two Advertisements In our everyday lives we are surrounded by advertisements, for example, we wake up receiving junk mail on our doorsteps, work in environments with posters on walls and leaflets on desks, all advertisements of some sorts. Each year, billions of pounds are spent on advertising be companies whose aims are to attract your attention and obviously wanting you to purchase their products, waiting for your money. In my essay I will be comparing two advertisements produced for television. These are for John Smith's and Strongbow, both are for alcohol with one difference; John Smith's bitter and Strongbow's sider. The first I will explain is the John Smith's advertisement. This advertisement has chosen to football as their topic. It starts off with five men playing football in a public football pitch, each performing tricks of staying the ball in the air and then passing it to another player. The first three men demonstrated their exceptionally good skills until they passed it to a rather over-weighted man which resembles the comedian Peter Kay who instead of performing tricks, kicked the ball directly towards someone else's back garden. ...read more.

The connotations of terraced housing are mostly homes for rather 'poorer' people in towns. Terraced houses are also more popular in the Northern part of England, linking to their alcohol bitter as bitter is Northern drink. I have also noticed that Peter Kay used a Northern accent when he decided to say the football term 'ave it', instead of traditional English 'have it'. This proves that Peter Kay is representing the target audience Northern people. Both advertisements used the area of their alcohol to set the scene that their target audience is most probable to be in. A similarity between the two advertisements is that they are both of a humorous genre. Both of them subvert the viewer in some way. The John Smith's way of humour is that Peter Kay simply kicked the football directly into some else's garden and being proud of it instead of performing tricks which could even be with more skill than of the first three players according to the viewers normal predictions. The Strongbow side however has set it much like a film leading the viewers to think maybe it could be a trailer for a film. ...read more.

This is used to remind you of the product's name as arrows are obviously linked to Strongbows. The slogan of John Smith's is 'No Nonsense' which is used to represent Peter Kay in his no nonsense of kicking the ball. The slogan is also in a font of numbers, which appeared in footballers' shirts. This links the John Smith's advertisement to football. After a small pause, Peter Kay comes along, brushes oranges, which was positioned right next to the bottle aside and grabs the bottle. This proves the importance of the John Smith's compared to oranges that could symbolise other items, showing that John Smith's is the most important thing in the world. I now conclude my review saying that the main differences of both the advertisements are inspired by the origin of the products. They both seem to use the same humorous effect, subverting the viewer into thinking something else, and then turning around immediately. The main differences are that John Smith's has chosen more of a 'cheaper' production style and Strongbow choosing a more 'expensive' approach to the cause due to the alcohol's origin, representing the areas and characteristics of their target audiences, preserving the good effect in the advertisement. These are only two of the advertisements in our television environment, world of advertising. I thank thee for reading. ...read more.