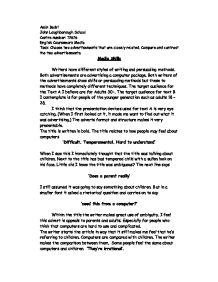 Amin Bedri John Loughborough School Centre number: 12616 English Coursework Media Task: Choose two advertisements that are closely related. Compare and contrast the two advertisements. Media Skills Writers have different styles of writing and persuading methods. Both advertisements are advertising a computer package. Both writers of the advertisements show skills or persuading methods but these to methods have completely different techniques. The target audience for the Text A I believe are for Adults 30+. The target audience for text B I contemplate is for people of the younger generation such as adults 18-28. I think that the presentation devices used for text A is very eye catching. (When I first looked at it, it made me want to find out what it was advertising.) The adverts format and structure makes it very presentable. The title is written in bold. The title relates to how people may feel about computers 'Difficult. Temperamental. Hard to understand' When I saw this I immediately thought that the title was talking about children. Next to the title has bad tempered child with a sullen look on his face. Little did I know the title was ambiguous? The next line says 'Does a parent really' I still assumed it was going to say something about children. ...read more.

As a whole text A is very powerful. Its layout is creative. There are pictures to illustrate what they are talking about. Also borders around the title. Furthermore, there were three columns. Furthermore the font size was a reasonable size to read. Text B is advertising an IBM computer. It starts off with a big, bold title, which ask a rhetorical question "What's inside an Aptiva?" This made me think exactly 'what is inside an aptiva?' This immediately involves the reader. The writer took an informal approach to the advertisement. It kept on repeating the words 'stuff'. I feel that here the writer is trying to involve readers who are not really into computers and making it sound 'cool' by using the word "stuff" "Stuff. All the stuff you can imagine. Loud, colourful, fast-moving, enjoyable stuff. Stuff for adults. Stuff for kids. Stuff for dogs." I believe that in the first paragraph the writer does use the word "stuff" a little too much. The writer may perceive computers to certain readers as boring (Like how I felt when I read it). On the positive side this extract shows use of colloquialisms. This is a feature of non-standard English. The word "stuff" is appropriate for a conversation, and here this involves the reader even more than before. ...read more.

This advert had to be comical it is being sold at Toys "R" Us. On the other hand text A doesn't have any colloquialisms. There was use of technical language in text A "integrated CD-ROM drive", " 'plug-and play' printers" If it was set out in more than one column and the writer described the computers features that helped persuade the reader. To persuade the reader text A associates computers with children, but stating that there computer is easy to use no frustration. Text B associates the computer with humour and presents the computer as fun to use. Text B tries encourage the reader to buy the product by giving jokes. That is a superior persuasive method. For text A I can't think of any suggestions to improved the advertisement. The font size on text A as reasonable and easy to read on the other hand the font on text B was very small. Not everyone will be able to read that advertisement clearly it becomes unreadable. Some readers may have to strain to read that advertisement. All in all text A the Apple Macintosh Performa is the computer I would buy. Its cheaper, there is a support line, I could buy it from various shops and it seems to me that the Macintosh has much more features to it. ...read more.