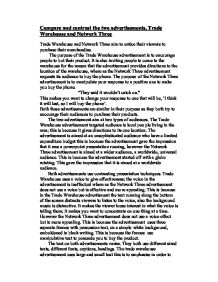 It uses a varied amount of fonts to interest the audience to continue watching. On the other hand the Network Tjree advertisement has used a contrast in colour, variety of fonts, different sized text. The contrast in colour i.e white background with black text results in an effective response as it shows the advertisement is simple and easy to understand. It is travelling through man's acquisition of knowledge for experience over the centuries. The text also results in indirect information causing the mind to be prepared to accept the experience over the advanced centuries. The message behind both advertisements is to appeal to their target audiences to purchase their product. This is used in many ways such as photographs. The photographs of the product show the audience more about the product, this will encourage them to buy it due to its features. Trade Warehouse and Network Three both use facts and opinions to express the products. However the former works by introducing discounts, while the latter aims at using more opinions. ...read more.