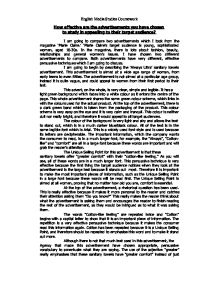 How effective are the advertisements you have chosen to study in appealing to their target audience?

How effective are the advertisements you have chosen to study in appealing to their target audience? I am going to compare two advertisements which I took from the magazine 'Marie Claire.' 'Marie Claire's target audience is young, sophisticated women, aged 18-30s. In the magazine, there is lots about fashion, beauty, relationships and general women's issues. I have chosen two different advertisements to compare. Both advertisements have very different, effective persuasive techniques which I am going to discuss. I am going to begin by describing the 'Always Ultra' sanitary towels advertisement. This advertisement is aimed at a wide age range of woman, from early teens to even fifties. The advertisement is not aimed at a particular age group, instead it is quite vague, and could appeal to women from their first period to their last. This advert, on the whole, is very clear, simple and legible. It has a light green background which fades into a white colour as it enters the centre of the page. This whole advertisement shares the same green colour scheme, which links in with the colours used for the actual product. At the top of the advertisement, there is a dark green band which is taken from the packaging of the product. This colour scheme is very easy on the eye and it is very calm and tranquil. This colour is neither dull nor really bright, and therefore it would appeal to all target audiences. The colour of the background is very light and airy and allows the text to stand out, which is in a much darker blue/black colour. ...read more.

The label looks like what is used on a piece of clothing, so it is an every-day image. Once again this shares the same colour scheme, making it look appealing. Having this image, emphasises the fact that this product has a "cotton-like feeling", and this is the second time that this phrase is written. This repetition really helps put emphasis on the words, and draws attention to the Unique Selling Point which will sell the advertisement. These images make the advertisement stand out more and images help it to look more interesting. It makes it more appealing to the target audience, and would draw their attention to it more. Images make it look more exciting and also the target audience can familiarise with what the product looks like on the shelves. This is a very good persuasive technique. On this advertisement, there are two logos. One of them is the "Always" logo which is the company which produces the product, and the other is the "Boots" logo. The "always" logo is placed in white writing in the top right-hand corner of the advertisement. Is it very small and is not a main focus in the advertisement. The logo is useful so that you know the company's brand name. Although the logo in the corner is very small, the word "always" is repeated three times, two are logos, and the other is in a very large font. This then accentuates the company name, to ensure that the target audience are familiar with who their company are. ...read more.