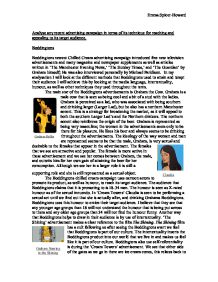 Analyse any recent advertising campaign in terms of its technique for reaching and appealing to its target audience.

Analyse any recent advertising campaign in terms of its technique for reaching and appealing to its target audience. Boddingtons Boddingtons newest Chilled Cream advertising campaign introduced five new television advertisements and many magazine and newspaper supplements as well as articles written in 'The Manchester Evening News,' 'The Sunday Times,' and 'The Guardian' by Graham himself; He was also interviewed personally by Michael Parklison. In my analysation I will look at the different methods that Boddingtons used to attain and tempt their audience I will achieve this by looking at the media language, intertextuality, humour, as well as other techniques they used throughout the texts. The main star of the Boddingtons advertisements is Graham the Cow. Graham is a male cow that is seen as being cool and a bit of a stud with the ladies. Graham is perceived as a lad, who was associated with being southern and drinking larger (Larger Lad), but he also has a northern Manchester accent. This is a strategy for broadening the market, as it will appeal to both the southern Larger Lad's and the Northern drinkers. ...read more.

Boddingtons uses this humour to entice their target audience. I believe that they see that any younger age groups than 18 will not understand the humour that is being put across to them and any older age groups than 34 will not find the humour funny. Another way that Boddingtons helps to draw in their audience is by use of intertextuality. 'The Shining' advertisement makes a clear reference to the film The Shining. The Shining film has a cult following so after seeing the Boddingtons avert we feel that Boddingtons is part of our culture. The intertextuality inserts the Boddingtons product into our world that we live in and makes us feel like it is part of our culture. Boddingtons also use self-referentiality is during the 'Cream Towers' advertisement. We see that either side of the gates as we go in there are ice cream cones, this relates back to the previous campaign in which Claudia was driving an ice cream van. They also use self-referentiality by the use of Graham being the star in his own advertisements; they reinforce this by the use of star endorsements such as Des O'Connor. ...read more.

Some of the objections were: The sexual innuendo, that they were sexually explicit, that they promoted bestiality and homosexuality, and that they were misleading as bulls don't have udders. The ASA came back and said that the advertisements would not be shown around the time when children's programmes are aired. They said that the cartoon concept meant that the advertisements would not be taken seriously, but that they did appreciate that some may find it in poor taste. The complaint wasn't upheld and Boddingtons continued to air their advertisements. These complaints increased the publicity on the campaign, which also helped with the advertising as more people were hearing about the product. Boddingtons are trying to widen their audience by showing Claudia being interested in the beer. They are pushing boundaries, which when done cleverly can work out, in this case it has, and can make the audience more interested as it has never been done before. I think that they have captured their target audience but have also picked up some younger viewers along the way. Advertising is used to make people feel good about the brand and I think that Boddingtons does this very well by making us feel that it is part of our way of life. Emma Spicer-Howard ...read more.