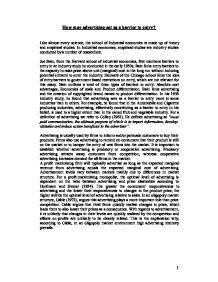 How may advertising act as a barrier to entry?

How may advertising act as a barrier to entry? Like almost every science, the school of Industrial economics is made up of theory and empirical studies. In Industrial economics, empirical studies are industry studies conducted by a number of researchers. Joe Bain, from the Harvard school of industrial economics, first mentions barriers to entry in an industry study he conducted in the early 1950s. Bain links entry barriers to the capacity to raise price above unit (marginal) cost in the long run without inducing potential entrants to enter the industry. Demsetz of the Chicago school links the idea of entry barriers to government based restrictions on entry, which are not relevant for this essay. Bain outlines a total of three types of barriers to entry: Absolute cost advantages, Economies of scale and Product differentiation. Bain links advertising and the creation of copyrighted brand names to product differentiation. In his 1956 industry study, he found that advertising acts as a barrier to entry more in some industries than in others. For example, he found that in the Automobile and Cigarette producing industries, advertising, effectively constituting as a barrier to entry in his belief, is used to a higher extent than in the caned fruit and vegetable industry. ...read more.

Without any immediate changes in the competitor's advertisement levels, consumers will be less likely to change their choices, even if the competitor lowers prices. If a rival company wishes to enter the market, it has to either offer substantial price cuts or advertise more than the incumbent. Bain classifies "persuasion" advertising as a barrier to entry, since either lower prices or heavy advertisement spending will heavily reduce the entrant's potential profits. John Sutton brought an extension to Bain's "Advertising as persuasion"-view in 1992. Sutton sees advertising as an endogenous strategic "sunk cost" expenditure, which firms alter like they alter price and quantity. In his model, Sutton assumes that companies use advertisement to influence different levels of perceived quality just like Bain does. This leads to consumers perceived quality becoming a function of firms' advertisement. F(u) = f + a (u), where F(u) is the total level of fixed costs and u is the perceived quality, with a (u) being an increasing function. Sutton finds in his three staged game, that even as advertising levels increase, the number of firms in the industry remains unchanged, even if the market is growing. (Church and Ware, 2000) Advertising as information-view This view is advocated by the Chicago school scholars, like Stigler (1961). ...read more.

Fiona M. Scott Morton, also studied the Pharmaceutical Industry, but only looking at the U.S.(1998). Fiona looked at the entry decisions generic pharmaceutical manufacturers face when they look at markets which have been opened by patent expiration to competition. She confirms the findings of Grabowski and Vernon (1992) stating that advertising is exogenous to entry decisions. She finds some evidence that brands may affect generic entry very slightly by advertising before patent expiration, but both effects are "nearly insignificant". Fiona concludes her paper stating that "brand advertising is not a barrier to entry by generic firms into the US pharmaceutical market". Conclusion We have seen two models in this essay, Bain's "Advertising as persuasion-view" and Stigler's "Advertising as information-view". The models outlined show how the different views shared on the purposes and effects of advertisement yield different outcomes on concentration and market entry. Persuasive advertising causing high brand loyalty forces potential new entrants to either outspend the incumbent for advertisement expenditure or to offer high price cuts. These constitute in substantial barriers to entry. Stigler's "Advertising as information-view" sees advertisement as a barrier to entry mainly in the long term, as companies selling products at the best price for the best quality to well-informed consumers, expand and benefit from economies of scale. However, empirical research shows that in the majority of industries, advertising does not constitute in a barrier to entry. ...read more.